Well it’s been a super busy last 4 weeks.........
The weather here in the Lakes has been great and with all the high mountain crags being dry, it's practically been a carte blanche to climb anywhere.
Adrian & I had a great day climbing up on Gimmer Crag in Great Langdale. It felt unseasonally warm for the end of April & were treated to warm rock & few other teams climbing on what is one of the best crags in the valley. 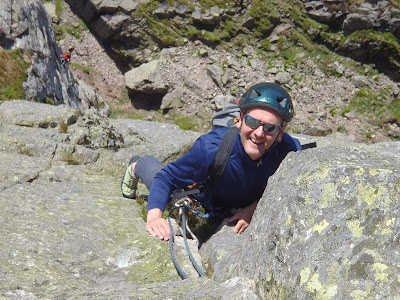 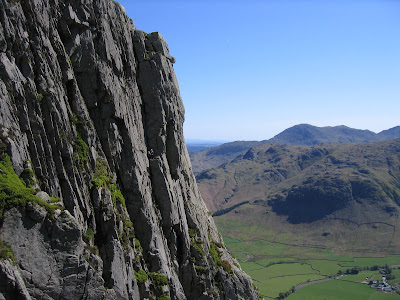 Tom Hull took this photo of Gimmer Crag, the day we were climbing there.
It's a great view looking into the upper NW face, with the upper W face in pofile & the Great Langdale Valley below.
You can just make me out leading the steep rib on the 2nd pitch of Kipling Groove with another team in The Crack
The weather contiued to hold with Chris Corlett & I having a great week of climbing together.
I headed back up into Great Langdale & we climbed some of the great classics on Raven Crag such as Revelation, Centipede & Bilberry Buttress, before heading up onto Gimmer Crag again late afternoon early evening for some more climbing. 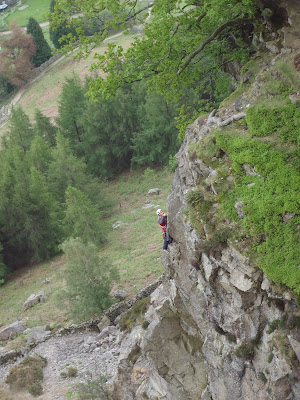 A team on Revelation, Raven Crag, Great Langdale
Then we headed over to Coniston & into Dow Crag. It's an East facing crag which is awesome in both summer & winter, giving quality routes of all grades in a fantastic setting. The rock's Rhyolite from the Borrowdale Volcanic group, which in climbing terms gives you great friction, good solid holds & good quality gear when you place it. 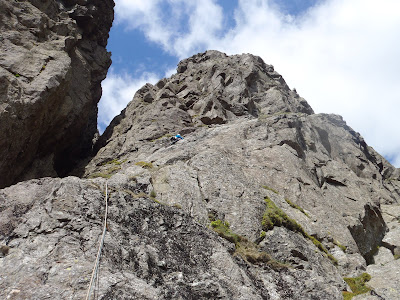 Enjoying the views on top of 'B' Buttress
An amazingly quite day again considering the weather, with only one other team climbing on 'A' Buttress

Climbers on Eliminate 'A', A Buttress, Dow Crag 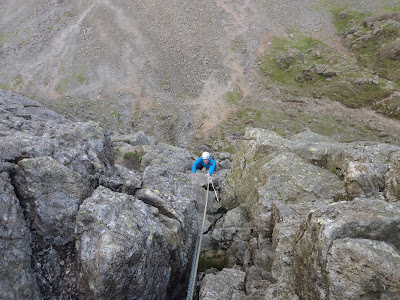 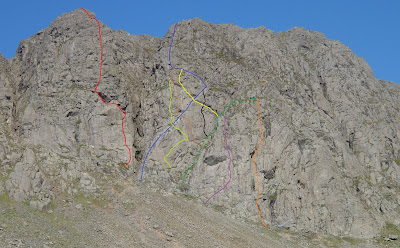 A topo of some of the classic routes around 'A' & 'B' Buttress's
Dow Crag, Coniston.

In White Ghyll we climbed the classic Slip Knot on the lower wall & then descended down to the base of the upper wall and climbed Haste Not which is a brilliant route at the grade. 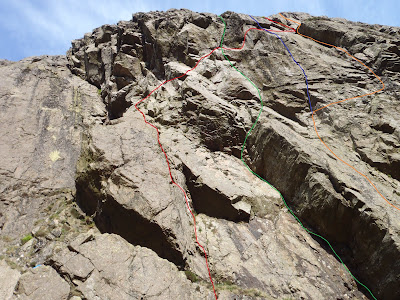 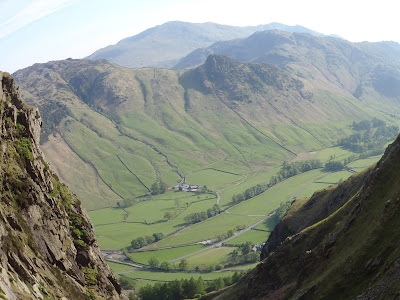 View down into Langdale from White Ghyll
We then headed North over Dunmail Raise & climbed on Castle Rock at the head of Lake Thirlmere. It’s another great crag with a steep and intimidating North Face and a cluster of classic 3 star multi-pitch routes all finding weaknesses up its overhanging walls.
We first climbed Overhanging Bastion which takes an unlikely line of weakness directly through the overhanging face. It’s a fantastic route high in its grade & amazing in its exposure.

The easier Zig Zag is another classic route weaving its way up through the steep face. It's an unwelcoming steep wall,apart from the steepness of it all it always looks green & unclimbed on. But as soon as you start climbing a route the holds, cracks & features unfold giving great climbing in the most unlikely steep & airy positions 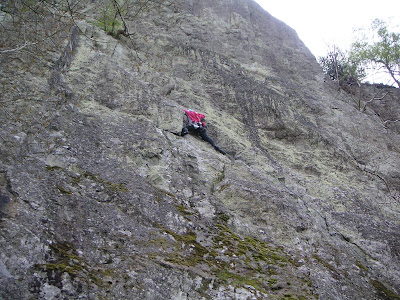 
This is just one of the best single-pitch crags anywhere. The rocks compact, fantastic quality, clean and as you stenuously pull your way up the steep, barrelling face you’ll find surprisingly good reliable gear when you need it. The climbing here is just awesome and only a short walk in from the road.
It’s a NW facing crag and does take time to dry, but when it does its just some of the best climbing anywhere.
We climbed the super classic White Noise which takes a leftwards slanting crack line in the centre of the crag. It’s a great 40m pitch with most of the steep climbing pulling into the crack at the start.
There are so many great routes here, which alone has inspired my climbing recently. Having said that, you can’t help being inspired when the weather in the Lakes is this good.
Happy Climbing
Ade
Posted by Adrian Nelhams at Wednesday, May 25, 2011