Mixed action in the Lakes & conditions

It's been super cold here in the Lakes this past week & now there's a good amount of snow in the hills.

We headed out into the Eastern Fells today & had a great day climbing a superb new mixed line on a crag I discovered last winter. 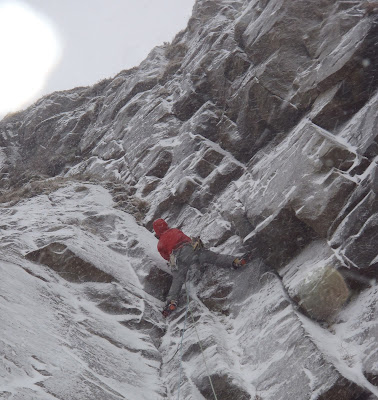 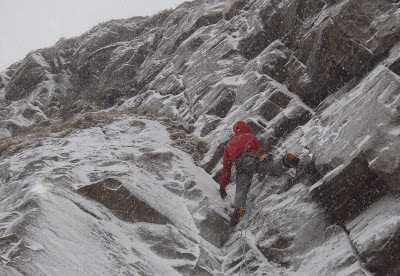 Dean working up into the steeper upper section

The pitch had good frozen turf where you needed it, steep cracks which at times you could hook into & at other times trust a shallow placement in frozen turf deep inside the cracks, torquing......& all requiring good footwork, as it's steep & the rock is smooth & featureless outside of the cracks & turf sections, so quite balancy & delicate  at times............. a great line. 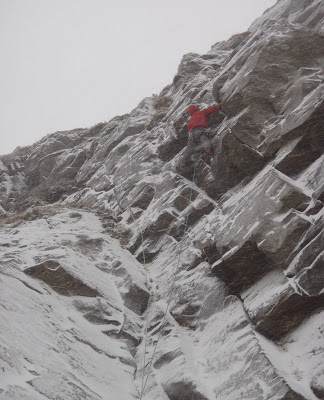 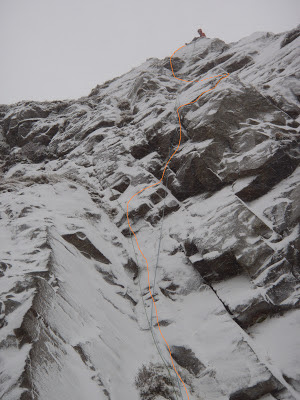 A mixed bag of weather today though - low cloud, light winds & snowing a little in the early part of the morning, which quickly turned to heavy snow & strong winds by mid-morning which then lasted for the rest of the day, bringing the snow levels down to the valley bottoms.

As we descended there was a rapid rise in temperature & the snow at around 400m was turning to rain & the ground under foot was quickly thawing. Back at the car it was 4 degrees & raining heavily.

Its been persistent heavy rain here in Kendal all evening.

A word of caution guys!

A climber triggered & was caught up in a wind slab avalanche today on a North Easterly slope!

He was one of a team of 3 that had walked up the Band in Great Langdale & was traversing North West from the Band towards the Bowfell Buttress & Flat Crags areas. It's a traverse that climbers take to access many of the routes in that area, but it does traverse across some steep & craggy ground, crossing numerous gulley's as it contours the hillside.

The strong winds over the past few days, have blown in a substantial amount of snow on this aspect of slope and at this altitude.

The wind blown snow had formed into wind slab sitting on a hard & icy surface/layer below - the climber weighted the wind slab by walking across it, triggering the slab avalanche which hadn't bonded to the layer below.

The warmer temperatures will help conditions if it rises above the summits & penetrates the snow pack, helping with the bonding of layers, but every area will be different, so take care.

Interestingly the forecast had talked about snow accumulations on South & South Easterly slopes with  the danger of slab avalanches....!!!

So from today it's obvious that the winds have been swirling around & loading a number of different aspects of slopes.........so take care.