Area visited – The Eastern Zaalay Range at the Eastern end of the Trans Alai Range.


Great flights via Istanbul into Osh, the second largest city in Kyrgyzstan. The city is located in the Fergana Valley and is often referred to as the ‘Capital of the South’. The city dates back over 3000 years ago and is located close to the borders of China, Tajikistan and Uzbekistan which is where it gets its ethnically mixed population of over a quarter of a million people. Osh marks the midpoint on the historic ancient Silk Road, the overland trade route taken by caravans between Europe and Asia and is home to the sprawling Osh ‘Silk Road Bazaar’ which bears the hallmark of that bygone era and is the largest, most crowded outdoor market in Central Asia and a great place to hang out! 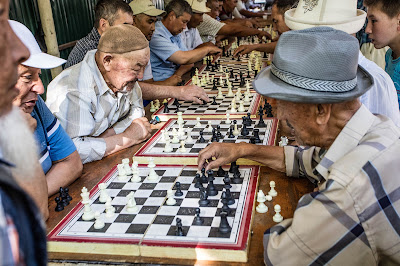 We spend the day in Osh while the ITMC team head to the markets to buy the final fresh foodstuffs before we head off into the mountains the following day.


We head up the only World Heritage Site in Kyrgyzstan, the Sulayman Mountain, which offers great views of Osh and the surrounding mountains. This mountain is thought by some to be the famous landmark of antiquity known as the “Stone Tower”, which Claudius Ptolemy wrote about in his famous work Geography. The National Historical and Archaeological Museum Complex Sulayman is carved into the mountain and contains a collection of archaeological, geological and historical finds. Then we hit the markets!

The following day we loaded our bags into the ITMC 6WD Kamaz truck and headed south to the small hamlet of Taldyk. Here we camped and recci’d the rocky limestone summits of Urch Terbur both for climbing possibilities and to help with everyone’s acclimatisation as Base Camp (BC) will be around 3500/3600m
.

The next day we headed on through the small border town of Sarytash and on to the hilly grasslands and foothills of the Pamir Mountains and towards the Eastern Zaalay Range where we had come to explore. Great views on the way over the pass to PK Lenin 7,134m in the Western Zaalay, Trans Alai Range a little further west. 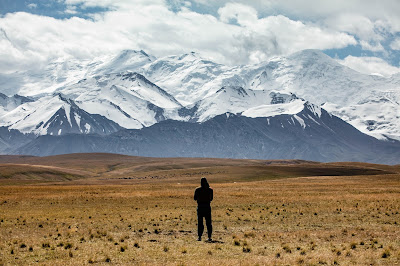 We passed the river delta, which fed down from the glaciers and summits we explored last year and carried on another 11km to the Kurumdy River. Here we drove up its wide delta with the truck forcing its way through fast moving rivers, over rocks and up steep banks until we found a lovely flat grassy area next to a clean water supply on the west bank of the river at 3600m which became BC. 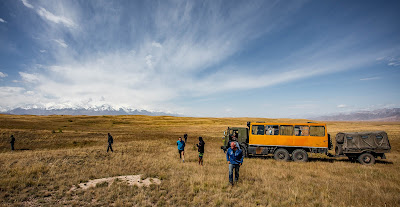 The following day we went off in three teams to explore the surrounding valleys and glaciers. It’s such a beautiful area of high peaks in a very quiet but accessible part of the Pamir Range. During this first day of forays, one team found a great Advanced Base Camp (ABC) at 4000 m, which would access a few great looking summits over the coming days, so on day 3 we all headed up into this high alpine basin to explore the surrounding summits. 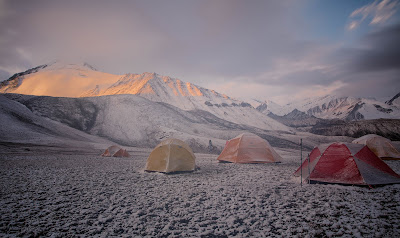 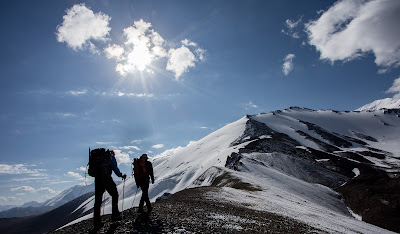 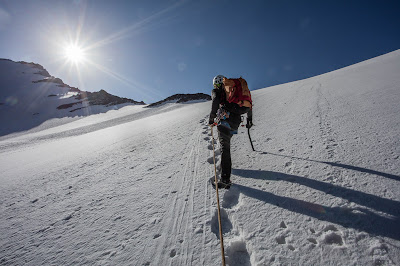 The team then headed back to BC for a much needed rest and wash before heading out on another recci day but this time in another parallel valley and main glacier/drainage system into the Karumdy River. We established a second and third ABC to explore this huge glaciated valley. ABC 1 was established at 3850m and ABC 2 at 4100m. 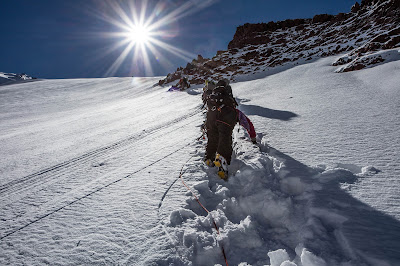 We had our eyes set on a number of options which included a couple of peaks on the East side of the valley and a couple to the South, all with slightly different access and possible routes on them, hence the different ABC options and attack points. The following day it snowed heavily although both teams went out to explore the various options and peaks close to them. High points were achieved but poor visibility and heavy snow stopped progress. That night the cloud cleared, the wind died down and it was a beautiful starry
night. 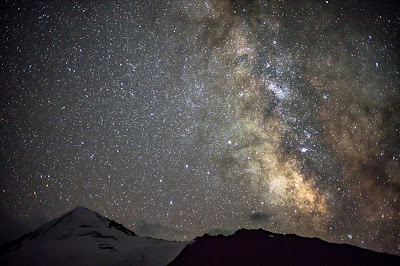 The following day both teams had success on their peaks –
PK 4760m we named ‘PK Kanzaada’ (Kyrgyz for ‘The Prince’)
Climbers – AN, JM, JS, JR 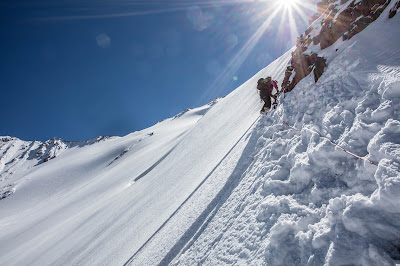 PK 4685m - we have asked the listeners of BBC Radio Cumbria to name this peak.
Climbers – PI, FS, RMy, RM

The next day we broke camp, loaded the vehicle and headed out of the main range, back through the town of Sarytash and towards Taldyk where we camped the night. 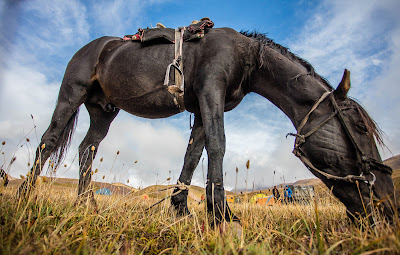 The following day we travelled up into the limestone crags and boulders of Urch Terbur for some rock climbing and bouldering….a very refreshing change from being in the high mountains! The warmer weather and lower altitude made for a fun day climbing and last active day on the expedition.


That night we continued 2 km to a small village called Kyrkol where we stopped at the Alai Yurt Camp. Here everyone had the chance to sleep in a traditional yurt, taste some traditional Kyrgyz cuisine and enjoy some local Kyrgyz music both through the storytelling from the Manas script and some incredible strumming on the Komuz both over the shoulder, between the knees and upside down….! It was a great night, which rounded off a fantastic trip. 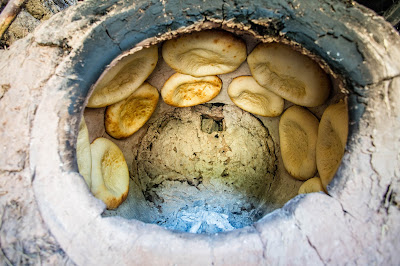 The last day on the way back to Osh we stopped at a small shop selling Kyrgyz felt goods. We had fun buying things and hoped this helped to give something back to the local community as a group of women had recently set up this small working co-operative selling their handmade felt goods. I am sure we will be part of their advertising in the future! 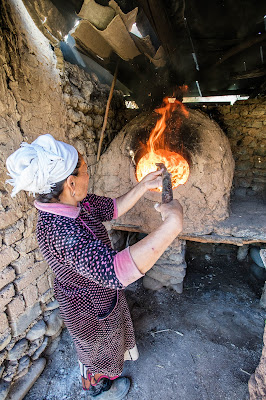 Thanks to Sasha our driver for getting us into base camp, Artur our cook, for some fantastic culinary delights and our two porters Mika and Pasha for helping with some heavy loads up to advanced base camp.

A fantastic trip....already making plans for next year!

Images courtesy of Jason Sheldrake - many thanks
Posted by Adrian Nelhams at Wednesday, September 14, 2016