Well, we had a great time climbing in Alaska, earlier this year. Conditions could have been better, but the Kichatna Spires were no less inspiring

We flew into Anchorage & then took a taxi up to Talkeetna. Paul Roderick owner of Talkeetna Air Taxi (TAT) then flew us into the Spires & set us down on the Tatina Glacier which became BC

We had two main objectives but unfortunately they were both out of the question - the first was on Middle Triple Peak, seen here on the right of the picture, at the southern end of the Tatina Glacier

We arrived at the same time summer did, which was great for the tan but too hot for the snow. Huge quantities of unconsolidated snow still hung around from the winter & recent heavy storms, choking gulley's & loading slopes continually avalanching & threatening our routes. 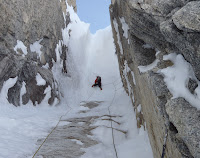 Dean started up this pitch on Mt Jeffers. Initially it was good ice, but it quickly petered out to an overhanging unconsolidated snow cone. The cone must have built up through the route continually avalanching. As we backed off & started to abseil the whole route cleaned itself out again & a massive avalanche ripped over our heads, just missing us!
We were hoping for over night freezes and a consolidation of snow but summer had arrived early and that had put pay to that - it never froze the whole time we were there.
So we decided to try the west side of the glacier & a south/east facing line to the top of a lovely looking peak I'd tried the year before.
The hardest sections of climbing were near the top of the route with some fierce dry tooling/mixed sections. 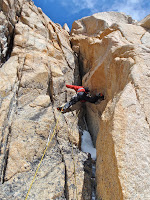 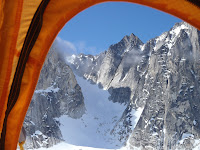 The next morning I was treated again to more of Dean's gourmet cooking and the smell of fresh bacon & eggs - oh the joy of flying in! 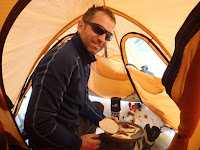 We then jumped on a route that had been tried before but conditions then had forced them to turn back. Ice had formed enough for us to force our way up the narrow gulley's & thin fragile veneers of ice, allowed us up the overhanging chockstones and steep walls.

It was a fantastic route, totally absorbing, long, tiring & very awkward climbing, nothing came easily - we were on the go for 19hrs 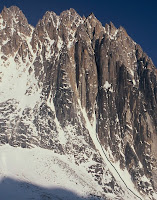 We named the new route - Metronome ED1 1000m
It was another fantastic trip, as always with Dean - one of the most beautiful & picturesque places i've ever been to & will keep going back to.
The place is so inspiring with so many unclimbed lines with so few people. All we saw the whole trip was a Bumble Bee and only Dean saw that! 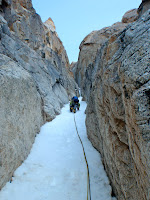 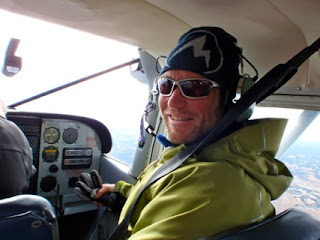 Many thanks to - The Mount Everest Foundation & The BMC for grants, which helped make the trip happen and to Mountain Works and Marmot for equipment & clothing.
Ade
Posted by Adrian Nelhams at Tuesday, October 12, 2010