It's great to be back.
Vladamir's friendly smile, the girls working in the office preparing permits, making phone calls, organising food and money, the porters loading kit and the drivers sorting the trucks all make me feel at home.
I go and say hello to everyone and get friendly hand shakes and hugs - everyone in Kyrgyzstan are so genuinely welcoming & friendly.
I collect my kit I'd left from the year before and check tents and tomorrow we leave.
We're heading to Tashrabat.

Tashrabat was an important valley, providing a vital link to and from China forming part of the Silk Road. Just below the pass a fortified Caravansari was built to store the valuable silk safely overnight. Traders would sleep with the silk before continuing their journeys.
The region prided itself in keeping a safe passage through for all the traders encouraging them to use the same route again next time. Money would change hands for the safe passage through and so would be the responsibility of the region to keep the bandits out and the silk safe.

The Caravansari at the head of the Tashrabat Valley
But we'd come to go rock climbing and our knowledge no-one had climbed in the valley before. As we entered Tashrabat from the north, huge limestone ridges, like great sharks fins cut across the valley east to west. We followed the narrow river and dirt road south to a small Yert camp 3km north of the Caravansari.

Over the 2 days climbing here we had a fantastic time making a number of first ascents, from 5 pitch routes up cracks, slabs and faces to a longer 500m route up a lovely ridge to a new unclimbed summit.

We left Tashrabat, drove around to the Touragat Pass and into the At Bashi Range of mountains.
Driving up the Kensu river delta we kept left to a great looking set of peaks and glaciers and the second highest peak Pk Kensu.
We made basecamp at 3770m just out of the river on a lovely grass plateau and went exploring.

Pk Kensu on right with unclimbed peaks middle & left
We were lucky enough to be able to make some first ascents from BC and then we headed and equipped an ABC on the edge of the Kensu Glacier giving us access to the higher peaks.

It was a fantastic area and we had great weather. We made a number of first ascents from a facile glaciated snow dome through to some technical routes at AD through to D+

Looking NE from a new summit over the area we climbed in
﻿
We had a great time and the whole team really bonded and climbed well together.
With the weather turning we decided to strike camp and head on to Son Kool a days drive away. We've visited Son Kool on a number of trips now and its just this amazing limestone canyon carved out by the Son Kool river fed from the huge Lake and surrounding mountains. We've already climbed many rock routes in the canyon making first ascents of routes from 1 pitch through to 600m.  It's just idyllic camping by the river and minutes walking to any line you choose. Last year Pat visited another parallel valley and was also keen to explore that further.
Anyway we left the mountains as the bad weather was arriving and as we drove back down the river bed, this happens! 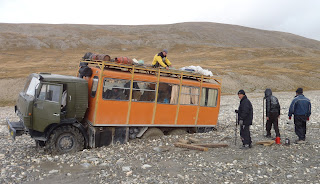 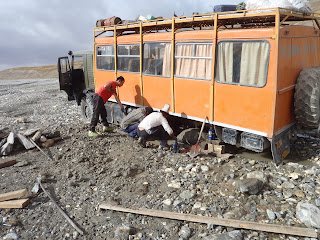 ﻿
Within a couple of hours, they'd jacked up and shored underneath each wheel with wood and stones, then with a little help from a tow off the 2nd smaller vehicle the truck was out.
Amazing stuff - we were on our way again
We stayed in Naryn again on our way back through to Son Kool Canyon. The main guest house was full so a few of us stayed in a more residential house around the corner which was great and very much more typical of where the local people lived 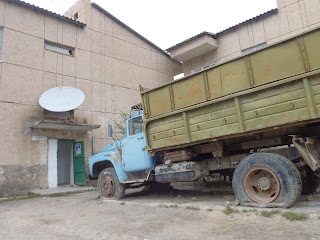 It then snowed for 2 days, so we hung out in Naryn until the sun came out.
It was only a short drive through to Son Kool and seeing the canyon again, picking out all the routes we'd done over the past few years gave me a really good feeling.

We set up camp at the other end of the canyon this year which gave easier access to the 2nd canyon which runs parellel. We split up again into smaller groups and all went off exploring and climbing some great new routes over the next 3 days.
Making first ascents of rock routes on limestone, placing your own gear is always very exciting and adventurous which is what these trip are all about. This coupled with the friends I've made and the new people I've met, the climbing friendships of the people I travel over with and the Kyrgyz culture/lifestyle I'm already looking forward to next year. 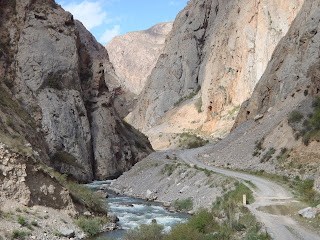 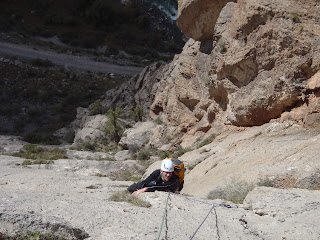 Adam working the crux of our new route Birthday Boys 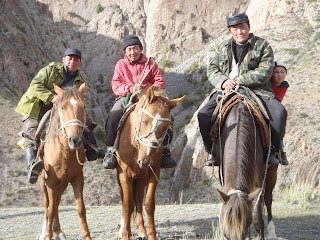