Well, much time has passed since I last had chance to sit down & catch up on life & even now it's only an hour!
The Zinal Rothorn seems a distant memory with so much that's been going on, driving back from the Alps, Flying out to Kyrgyzstan, virgin summits climbed, valley's explored, first ascents of rock routes climbed, mutton ate & Vodka drunk! not to mention the fact that Sal has sold the house while I was away, we've bought another & our life now is in boxes which fill most of the space that used to be my office! So yeh, all go at the moment & thank Leo as the Fly Cave's been a god send this busy time with short 1hr/1.5hr hits to keep the climbing ticking over & to let off some steam! 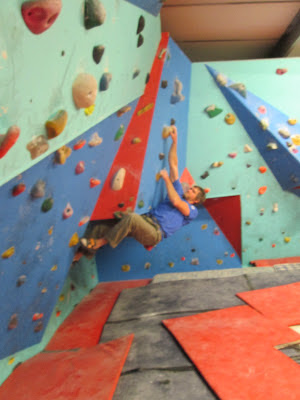 Me trying to get back to some Fly fitness
Note the picture isn't even in focus! well, Woody was waxing on about how good his new camera was, view finder + screen, 'AA' batteries & how I needed one.........well this is the image from that same camera he fired through during a session last week! he was either still shaky from working the green or I'll give the camera a miss thanks Woody!
Anyway, we had a great week. The sunday was tipping it down but we managed to get a couple of good multi-pitch rock routes climbed down in the Rhone Valley close to Martigney which was very rewarding as it was bad weather & the rock very slippery.
On the Monday we then drove to Sierre & headed up the Val d'Anniviers to Zinal where we parked up & took the look but very scenic walk into the Mountet Hut.
This hut has some fantastic views, down to the merging Grand Cournier & Zinal Glaciers & across to the surrounding peaks that dominate the head of the valley here - the N/E side of the Dent Blanche, the N/Face of the Obergabelhorn & the west face of the Zinal Rothorn - amazing. 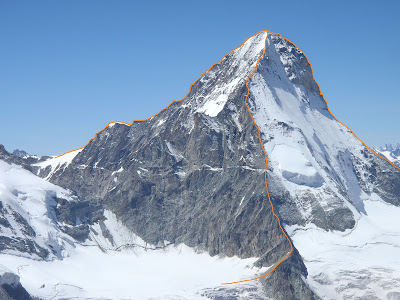 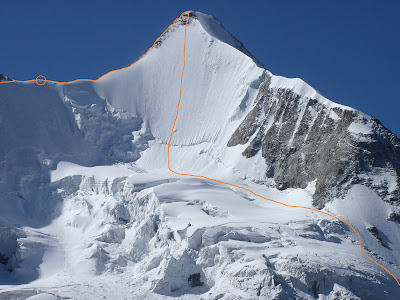 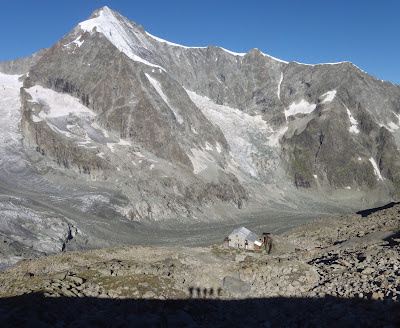 The Grand Cournier & the Mountet Hut seen when heading up to check out the route to the North Ridge of the Zinal Rothorn
Our plan was to have a shortish day after a long hut walk, acclimatise & cover/refresh some basic skills while climbing the Trifthorn. I hadn't climbed the Trifthorn before & had always been steered off the peak by folk saying that is was just an easy plod. I'd always thought that it looked good sat there in between the Zinal Rothorn & the Obergabelhorn & as often the case it turned out to be a great little climb which fitted the day perfectly. 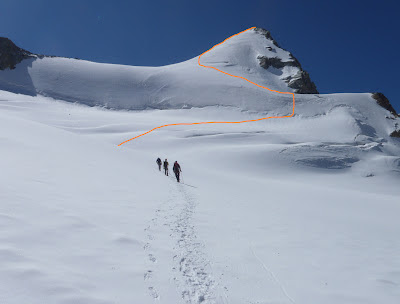 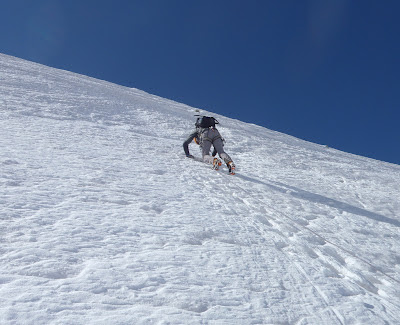 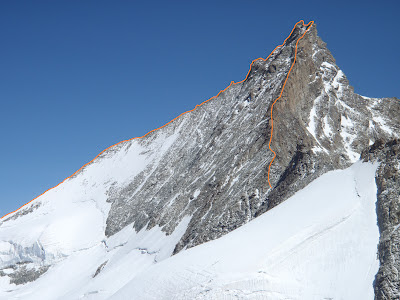 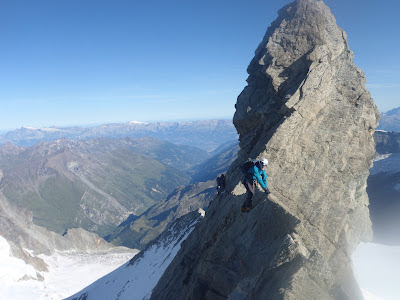 John Riley enjoying the North Ridge of the Zinal Rothorn

A great panorama view from the Zinal Rothorn
The Matterhorn on the right, The snowy N/Face of the Obergabelhorn & the Dent Blanche on the right. 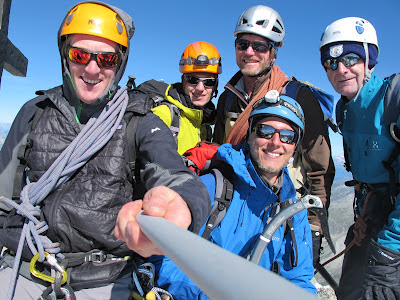 Matt, me & the team on the summit of the Zinal Rothorn 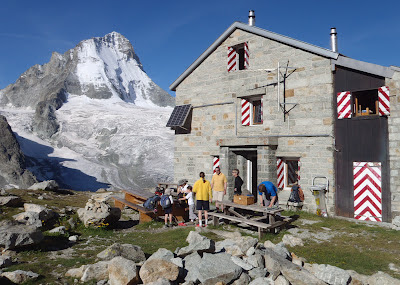 Packing up to descend from the Mountet Hut with the Dent Blanche behind
We had a day rock climbing on the friday which rounded off a great weeks climbing.
I had another week in the Alps before heading home - we climbed a couple of the 4000m peaks around Saas.

A fantastic early morning view looking across to the inspiring Mischabel Range & the 4000m peaks rising above Saas Fee
Left to right - Monte Rosa, Stralhorn, Rimpfischhorn, Allalinhorn, Alphubel,Taschhorn, Dom, Lenzspitze and the Nadlehorn which are all 4000m peaks 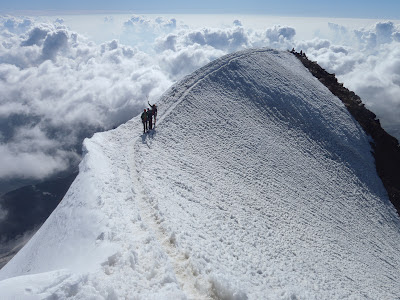 Summit ridge on the South Ridge of the Weismeiss, Saas Grund 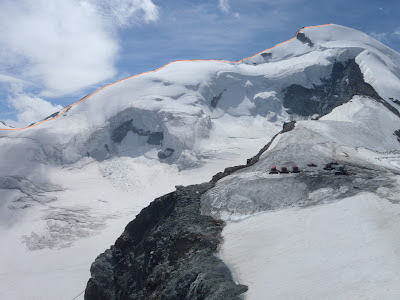 The classic Hohlaubgrat on the Allalinhorn, Mischabel range Saas Fee
And the end of a great summer climbing in the Alps.
Safe climbing
Ade
﻿