The 3 Peaks Cyclocross
51 years ago in 1961 John Rawnsley of the Bradford R.C.C organised & won the very first 3 Peaks Cyclocross. It was John’s passion to organise a tough cyclocross event that would test & challenge the rider to their limits. At the time John felt there would be absolutely no risk of 100’s of cyclists taking on the 3 peaks challenge, as he very much doubted if there would be more than 30 riders in the country who’d be prepared to take on the challenge! 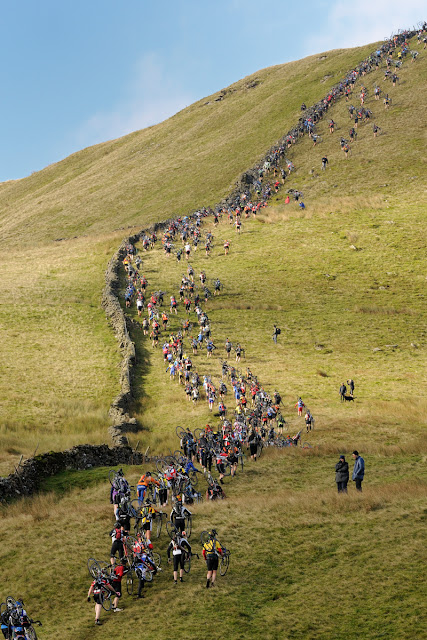 An image from last year, as we made our way up Simon Fell towards the summit of Ingleborough
Yesterday on the races 50th Anniversary a little under 600 cyclists (including myself) braving the weather that left Helwith Bridge & headed up the road to Horton-in-Ribblesdale (the race didn't run in 2001 due to Foot & Mouth). Around 500 cyclists managed to finish the event which saw some of the toughest conditions seen over the 50 years of the event taking place. Thick low cloud, gale force winds, hail, horizontal rain & flooding sapped all the strength of the rider as they ascended & descended the classic 3 Peaks, of Ingleborough, Whernside & Pen –Y-Gent.


It’s a 61km circuit over the 3 Peaks starting & finishing at Helwith Bridge. 33km’s is riding on unsurfaced paths & tracks, around 8km is unrideable & the rest is on the road.

Yesterday with the ground being so wet/boggy & the wind battering you at gale force strengths it was hard not to have to push or carry your bike during parts you could normally ride. It made for a really tough day, especially when carrying you bike knee deep in bog with the wind trying to rip the bike off your shoulder, or trying to ford one of the many rivers, climb the steep, slippery & boggy hillsides and cycle down very exposed windy ridges, with little visibility & on very wet slippery limestone……………………….. 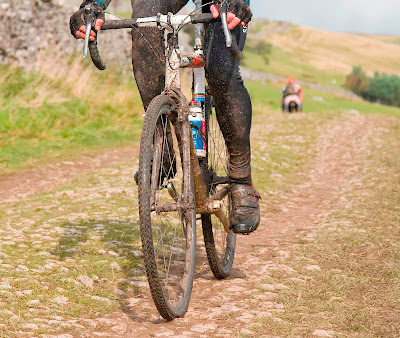 It's just a fantastic & inspiring event as shown here from 2010 -
http://vimeo.com/15351300
I was chatting to a guy at the finish, who had come up to watch the event. He said ‘he was surprised the event wasn’t cancelled?’ I said ‘they'd only cancel the event if it’s bad weather weather!’ He looked at me & said ‘what the hell do you call this!!’ & I said ‘your in Yorkshire now mate!’.


It’s one of my highlights of the past few years, a real adventure, physical endurance & test of bike handling skills on some of the toughest terrain a road bike without any suspension, but with standard drop handlebars can endure – awesome.
Rob Jebb did a great job winning the race, his 9th win since the year 2000 finishing well clear of the field & last years 3 Peaks winner Nick Craig.


Roll on next year