Hebden Bridge, in the Upper Calder Valley is a small Mill town on the Yorkshire side of the Pennine Hills.

Hebden takes its name from the packhorse bridge over Hebden Water.

The town developed in late medieval times as a river-crossing and meeting point of packhorse routes from Halifax to Heptonstall, Burnley and Rochdale. 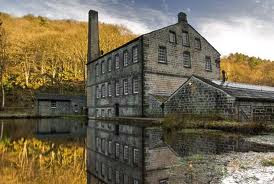 In the late 18th century mechanisation, steam power & the arrival of the canal & railway meant that this small west Yorkshire town swelled & grew to the sound of the textile industry producing wool & woolen goods. Working Mills & chimneys towered above roof tops and houses spilled out on the valley sides, giving the town its characteristic double-decker housing.

Traditional industries are no longer a major force, but buildings have been stone-cleaned and revitalised, the Rochdale Canal has been restored. Hebden Bridge in 2012 is alive again with small boutique shops, great character & a rich & diverse community life. 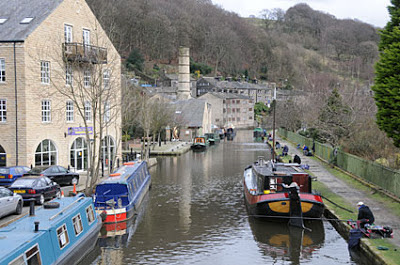 Last Sunday saw the 1st ‘Mills Hills’ Cyclocross Sportive so a few friends & myself headed down from the Lakes to take part. As the name suggests it passed a few mills & headed up some bigs (boggy) hills! which was great fun. 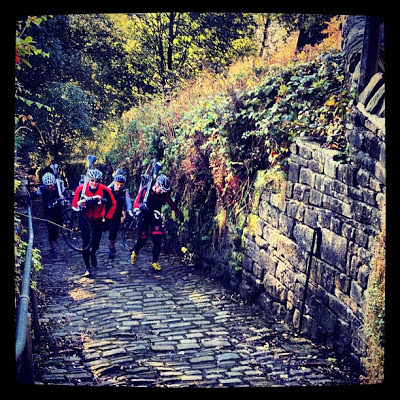 Racing up one of the many steep cobbled sections on sunday, Hebden Bridge
Image courtesy of Mike who raced on in front, topped out on this cobbled section & had enough time to get out his phone & snap this shot!! Oh to be 20yrs younger!

The 30miles, part road and mostly off road, took us up over all the local fells, down steep bridleways, up steep slippery cobbles, past reservoirs with great views back down into the steep Upper Calder Valley & Hebden Bridge.

It was a tough ride out, but fantastic to be exploring new tracks & fells in a little known area for me. The organisers put on a treat for competitors at the finish – pie, peas & gravey! Which we’d all consumed before we’d even got the bikes back to the car!

Safe descending down those slippery cobbles!