Yes! & just back from another great trip to Kyrgyzstan again. This year we again visited the At-Bashi Range climbing 9 virgin summits & 4 new rock routes in the now famous Son-Kool Canyon.

It's been super busy here this tail end of the summer finishing off with a couple of great weeks in the Alps & then less than a week back home before heading back out to the land of virgin summits, yerts & kumis  (fermented mares milk!) 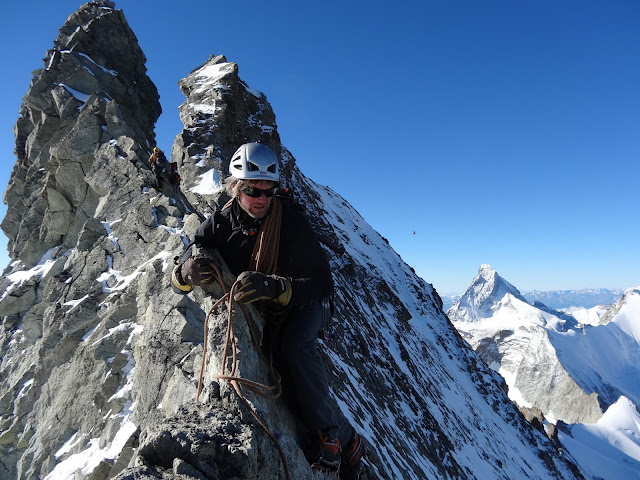 Me working the North Ridge of the Zinal Rothorn 4,221m AD

The fantastic panorama from the Cabane du Mountet
In the centre is one of my favourite Swiss peaks, the Dent Blanche & looking left the Obergabelhorn with is huge triangular North Face. Left again you can just see the summit of the Matterhorn which looks like it's on fire. 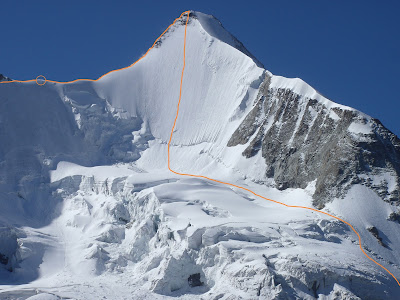 The Classic North Face of the Obergabelhorn 4,063m TD- 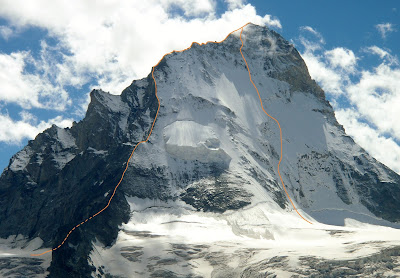 East North East Ridge (Viereselsgrat) – D 1,100m FA U Almer G Baker A Pollinger & J Stafford Anderson
One of the great ascents in the history of alpine mountaineering, prompting Almer to exclaim from the summit ‘We are 4 asses (vieresels) to have climbed up this route!’ The party successfully reached Schonbiel late that day to be greeted by Gabbett & his 2 guides; Lochmatter father & son. Tragically the very next day this trio was killed while attempting the SW face of the mountain, an event which prompted Queen Victoria to write her famous letter to Gladstone expressing her disapproval of mountaineering & a suggestion that it might be banned as an activity! 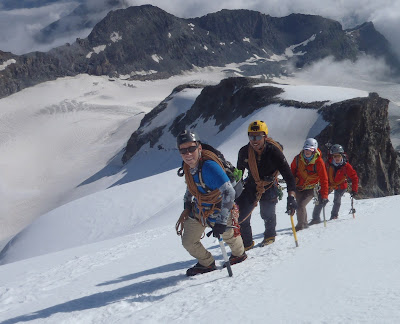 Teaching alpine skills on the Hohlaubgrat on the Allalinhorn 4,023m AD 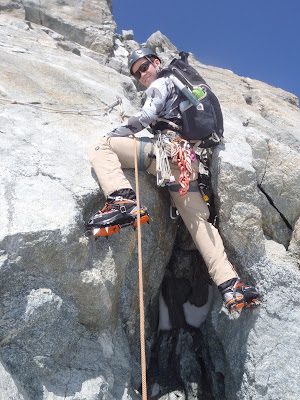 Tim getting stuck into the mixed section on the Hohlaubgrat, Allalinhorn, Saas Fee 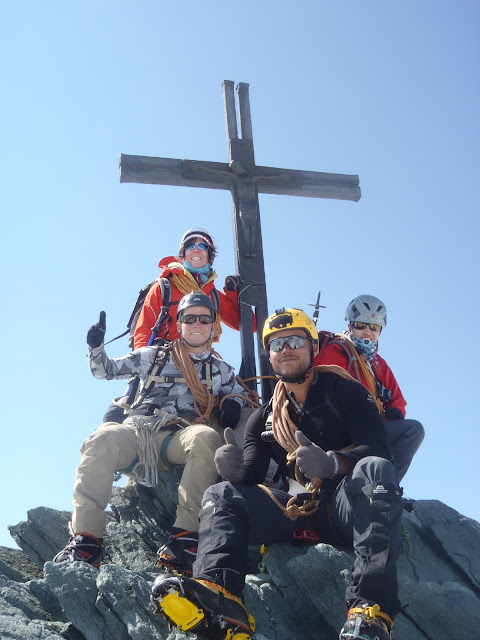 Team shot on the summit of the Allalinhorn - Teaching Alpine skills week. 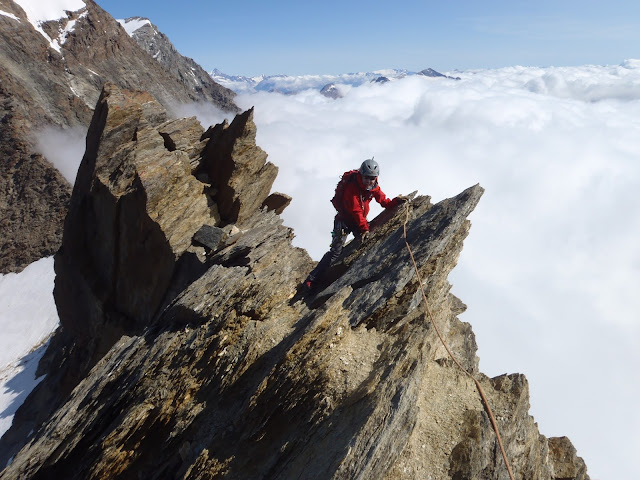 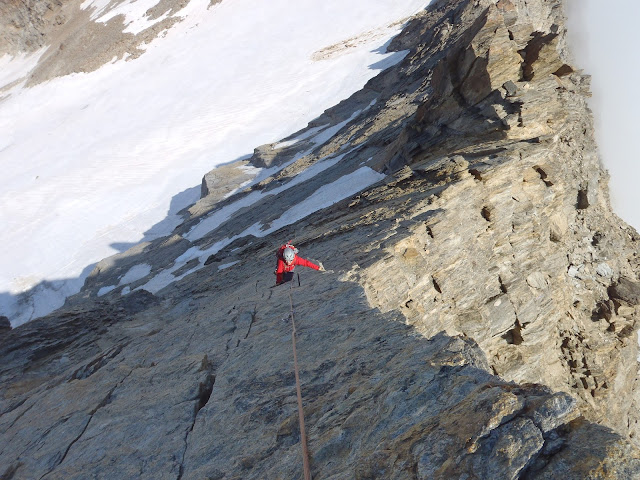 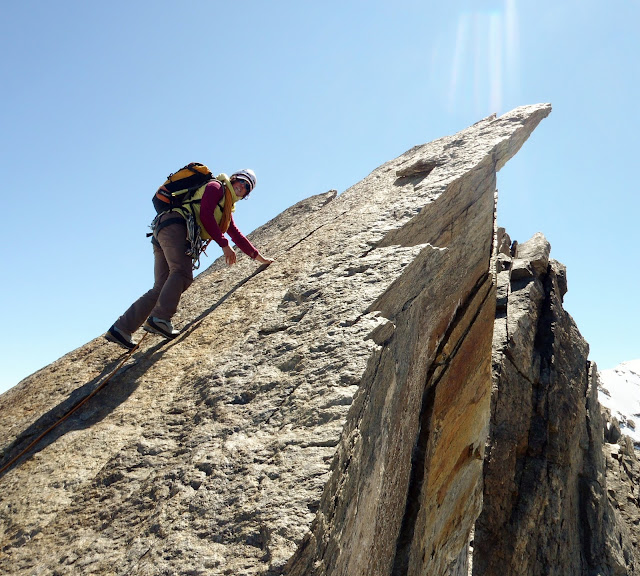 Roccio enjoying the warm granite, on one of the many pinnacles on the North Ridge of the Weissmeis 4,023m 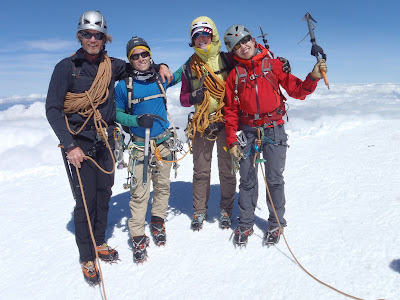 Summit of the Weissmeis - with only 50mins till the last lift down & the Tele station shuts!!
We made it with a couple of minutes to spare! 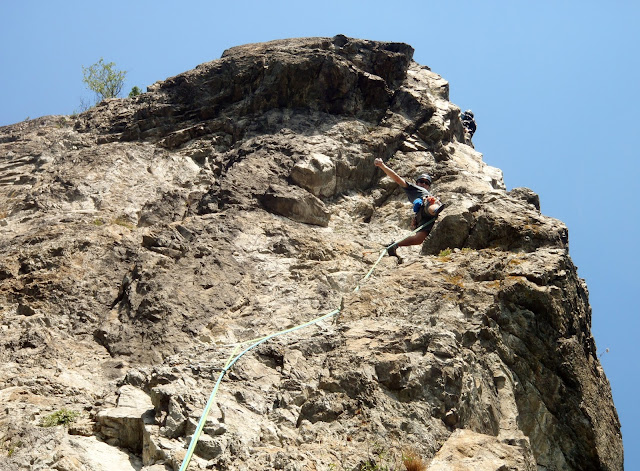 La Piliar de la Pissechevre - 6a+, 6 pitches. A great rock pinnacle above Lavey down in the Rhone Valley. 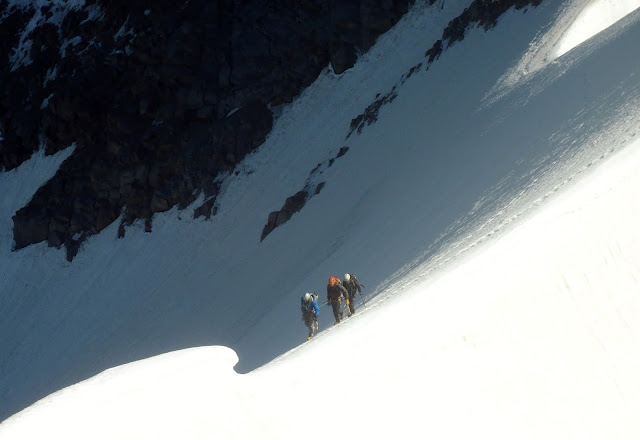 We headed over to Italy & climbed the Petit North Face/North Ridge of the Gran Paradiso 4,061m

The true north face wasn't in the best condition, with the snow face now looking very grey, so we opted for the Petit North Face which gave us some great mixed climbing & a good number of pitches on steeper ice which led us up onto the North Ridge & then along it's rocky crest interspersed with a steep snow arete to the summit of the Gran Paradiso - a great climb.

We then headed down to the Refugio Vittorio Emanuelle & on down the valley to Pont & Aosta, finishing up in Arnad for some rock climbing the following day. 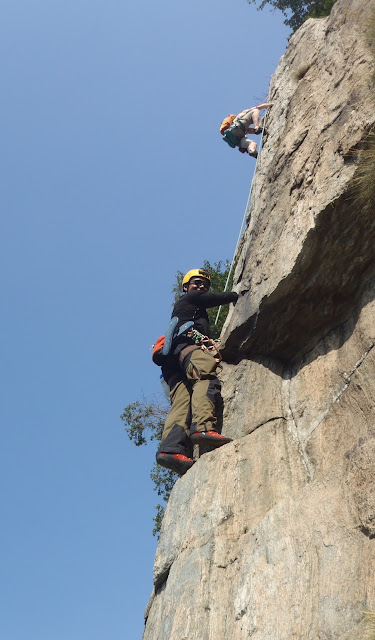 Tony enjoying the climbing on the Paratone, a huge rock dome above Arnad in the Aosta Valley -  6a, 11 pitches 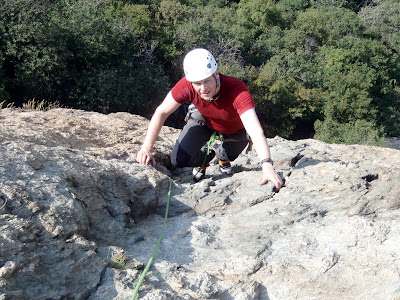 Kari enjoying the slab climbing low down on the Paratone, Arnad, Aosta Valley.

We then headed back to Leysin in bad weather traversing L'arete des Gais Alpins the next day. It's a great ridge traverse above Montreux close to Lake Geneva graded AD+ 300m, which more often than not can make for a great bad weather option if the mountrains are blown out.

The next day we headed up into Arolla & walked into the Cabane de Dix, but woke up early on the Friday morning only to be greeted by thick cloud & snow. On the way back to Leysin we had some fum on the Evolene Via Ferrata - 500m TD 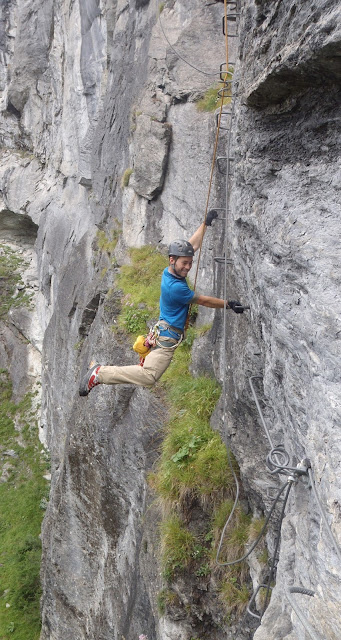 Tim having some fun on the Via Ferrata above Evolene, Arolla Valley.

So yeh, a busy couple of weeks in the Alps before I made the long journey back to the Lakes by car. It felt like a quick wash, re-pack & then I caught the train back down to Manchester to meet the guys all heading out to Kyrgyzstan.
Back home now though & working through some of the photo's I took while away, as well as writting up the virgin summits we climbed & accuratly mapping the area we visited.

Finally Sally & myself have been steadily working towards setting up the new ISM office here at home in the Lakes. Pat Littlejohn & Steve Jones retire in a couple of weeks along with Pat's partner Eira who at the moment runs the ISM office. The office will move to the Lakes, Sally will take on running the ISM office, answering enquires, taking bookings etc & I'll take over a large part of what Pat does at the moment directing the buisness. It's been a long transition & a lot of hard work but we're both very excited about the changes. Pat's been at the helm now for over 20yrs, so no pressure!!
Fortunatly key directors Steve Monks & Terry Ralphs are also very commited, with them each having continuing roles within the buisiness, with us all working towards a great future at ISM.

More importantly, I've been down the climbing wall a couple of times since I've been back! starting to get myself strong again after a summer in the Alps - heading down for some Fly Cave action tonight!