Giving the legs a spin out yesterday

I had a great cyclocross ride out from home yesterday, a circuit which takes me straight up onto Frostrow Fell just south of Sedbergh. Frostrow splits the Garsdale valley & Sedbergh from Dentdale where the ride drops down, linking up lanes & bridleways to loop back again via a different high point.

It's tough going in both summer & winter, as your either in summer fighting to keep the wheels turning over long tussocky grass & bog up hill or you're carry the bike!
Where as yesterday the ground was bullet hard & although I surprised myself on sections of up hill I could ride, on the whole I was either carrying over flat, pan hard ice where I had no grip or fighting the long grass & bog to the side of the path which I couldn't ride because it was so icy! 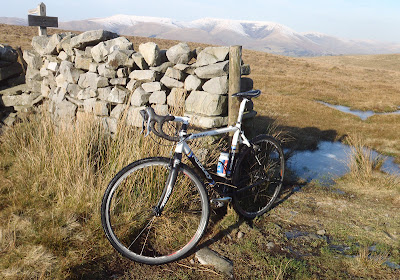 Great ride all the same.

Fantastic views as well back across to the Howgills to the North of Sedbergh, which still had snow on the tops & down to Sedbergh itself with the Howgills behind.