Snow here in the Lakes over the weekend, Kendal had a good covering & the central fells looked very white. We spent most of the weekend tobogganing with plenty of folk out doing the same! Very mild though all weekend & I woke up today with most of the snow now gone & even the fells looking less white - it must have been 6 or 7 degrees in the sun today, the freezing level would have been above he summits.
It's a shame, as ice was just starting to form as we did have a reasonably cold week here last week & another 3/4 days of cold weather & the icefalls would have started to come into condition.
Even so, if it does go cold now then it would have been a good cycle to consolidate the snow pack & make for some good gully climbing & some mixed action - fingers crossed

Anyway I'm enjoying some time at home & have been locking myself in the Fly Cave & getting myself fit! 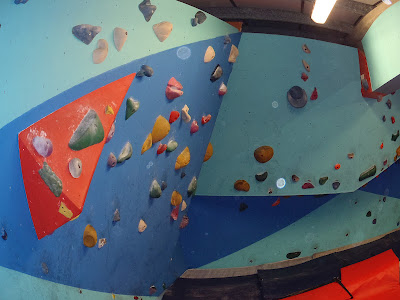 The back end of last summer Leo built a small bouldering wall near to his home in Staveley. It's not for profit or open to the public, but a scene for local climbers to meet up & get strong.  Leo's done an amazing job creating such a varied 3D wall in a relatively small space. 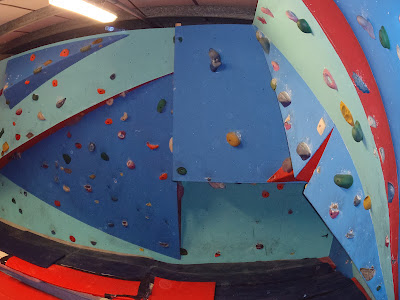 Volumes, roofs, leaning walls & overlaps create a fantastic bouldering room with the main aim of getting you fit & strong.
There aren't any 'up' problems like many walls, but circuit style problems. Problems starting from one side of the room & either finishing at the other side of doubling back & finishing up where you first started up making 2 laps of the wall. 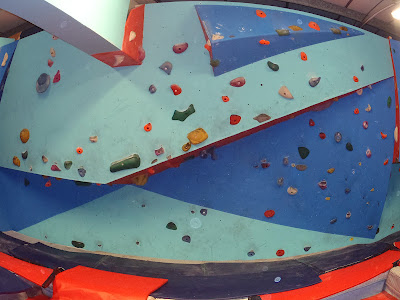 Not one for being that into bouldering but the wall has really inspired me - the problems are long and encourage good holds for the hands & not so good holds for the feet, meaning that your less likely to get any finger injuries & more likely to just get climbing fit & super strong. It really helped leading up till Christmas & I've already noticed a big difference in my climbing fitness & strength by just getting stuck into Leo's circuits.
It's taken me back to my roots, when all I ever did was circuits when we used to traverse up & down corridors & under motorway bridges before climbing walls ever took off & I'm really enjoying it.
I needed a change climbing wise, something different to get stuck into through the winter here at home which gets me super fit for when the sun shines again & warms the rock up.
It's great & I'm very inspired.
Stay safe
Ade
Posted by Adrian Nelhams at Monday, February 06, 2012