Training hard most days down the Fly Cave & with the better weather as well, I've started running again & getting out on the bike which has been great.

But today I headed up onto Pavey Ark which was also a good bit of exercise!

The crags still very wet in places though & many of the routes will still take some time to dry out, due to the high amount of vegetation all over the crag. The vegetation above many of the corners, crack lines & grooves is still very saturated. But it's south east facing & catches plenty of sun which is great, so can see routes like Golden Slipper, which takes a line up the clean open wall above Jacks Rake drying out very quickly. 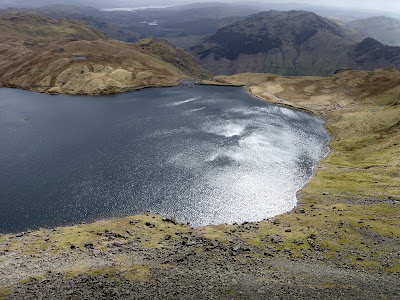 Great views down to Stickle Tarn below Pavey Ark today, with Lake Windermere visible in the distance. 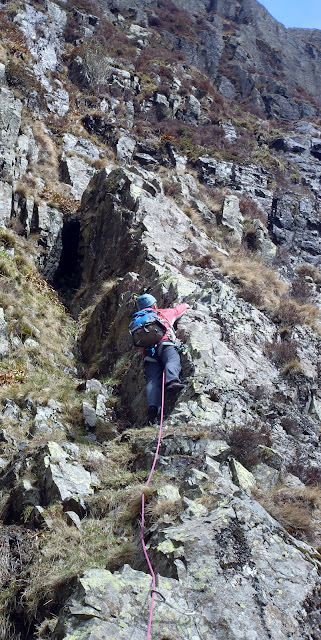 We headed up the easier Crescent Climb today, which is a great mountaineering style route. You climb the initial broken arete just right of Crescent Gully, which then leads to an exposed traverse above Crescent Slabs & then up to Jack's Rake & the base of Gwynne's Chimney, which was great fun.

Apart from an enjoyable climb, it gave us a chance to scope out some of the other routes & lines above Jack's Rake. 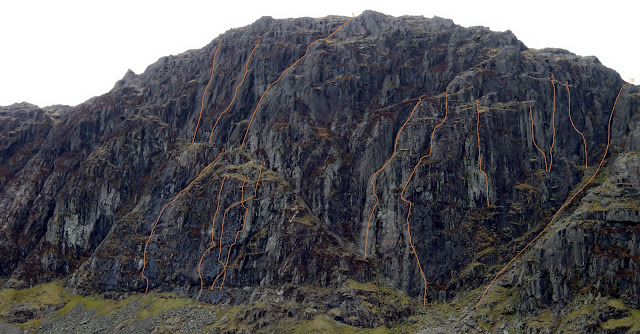 It's a great crag, the highest in Langdale & one of the biggest in the Lakes. It catches plenty of sun & has plenty of single/multi-pitch routes at all grades............Looking forward to getting back there when it dries out a little more.

PS sent the Black route in the Fly Cave yesterday.....7b+, so pretty stoked about that!
The routes very fingery & about 22m long.......I went during the day yesterday but fell off it close to the end, so pretty fired up, I went back in the evening after I'd taken Monty to Beavers!! climbed it & then picked him up afterwards!