Enjoying some time at home this last week, but stilling enjoying that warm glow you have after having been on a great trip - the Rockies never ceases to inspire me.

Weather here in the Lakes has been amazing, as up until last week we’ve had some great snow & ice conditions in many of the high mountain gulley’s, giving some great late season winter climbing.
It feels very warm now though & much snow has now been stripped back, although it wouldn’t surprise me if there weren’t a few high gully routes still in condition!

I’ve been trying to keep up some finger strength throughout the winter & have tried to boulder at least once a week wherever I’ve been. 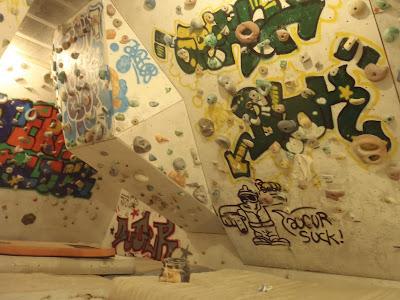 Jacky a good friend of mine who lives over in Morzine, has a great bouldering cave beneath his house……………a few friends helped him set it up & now it’s running like a co-operative & mates come & go when they like. There’s a great scene with everyone super keen throughout the winter working hard on the problems, inspired to get out when the weather warms. I tapped into it many times when I was working over that way, as the scene was really friendly, welcoming & relaxed…………I think they enjoyed sand bagging the British Guide over there working! Just wait till they come over to the UK!

There’s also a good small cave over in Leysin which I could do circuits on, keeping both some endurance & finger strength.

You know what it’s like if you completely loose the specific muscle groups, it takes so much more time to get back to where you were before you took the time out. It’s a difficult & can be frustrating thing when guiding, keeping the specific muscle strength up in all the different disciplines eg staying rock climbing fit throughout the summer when your climbing big mountains each week – the wrong muscle groups are getting stronger & heavier!!
Mustn’t grumble though, I’ve had a fantastic winter icefall climbing this year. 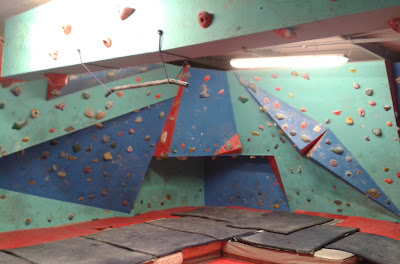 
So back down the Fly Cave all last week, shocking the body into remembering what its like rock climbing again & god I felt stiff, I’ve done more stretching this week than I think I ever done! or is that just my age now!
Ticking over throughout the winter has really helped though, as I’ve felt changes & results every day which is great. Not back 'on it' by a long stretch, but progress none the least & not as punished as I was on day 1 last week!
Very inspired with the change of weather & getting out rock climbing again………..already thinking about new rock routes here in the Lakes I’d like to climb. 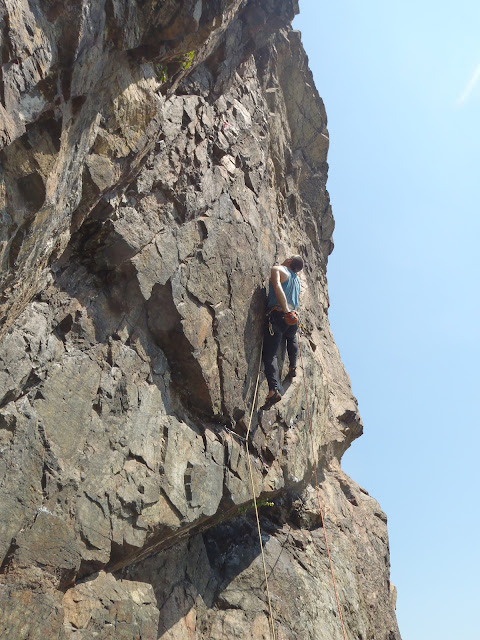 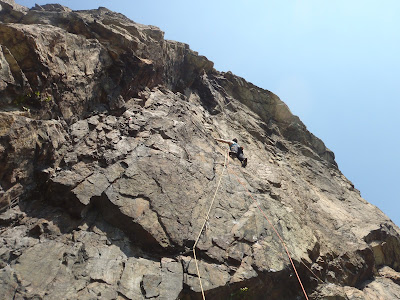 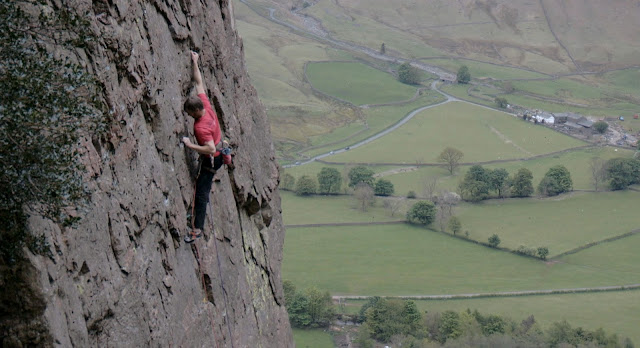 Me on our new route last summer - 'The Firing Line', Raven Crag, Langdale
Inspired to get strong, especially if team Morzine come over for a week Trad climbing!!

Ps check out Adam Beyer at http://www.mixcloud.com/adambeyer/ ..........& hook into one of his podcasts - 56mins of a great Techno sounds to train hard to!
Stay safe