Some of my thoughts on ‘Short Roping' - moving over more broken ground safely & efficiently.

Short roping is only designed to prevent a slip from turning into a fall.

These thoughts are a guideline to ‘dynamic short roping’ – a technique used to short rope a mixed ability team efficiently and safely over moderate broken ground in summer conditions.

With a clear initial briefing & good communication you’re able to manage the rope, keeping the second person ‘lightly felt’ on the end of the rope at all times & so in a position to arrest a slip if necessary.

Short roping is one of the most difficult skills to learn, it’s also when you’re at most risk and exposed from a second person slipping or even worse falling.

Decisions on where and when to move together depend upon your ability, the weather and the terrain/conditions you find yourself on.
You must have confidence in each other, if either person feels anxious then that will transmit through the rope to each other.

In judging the terrain ahead against the abilities of each other, you can make the decision of whether to move together on not.

Give thought to –
How many people you have on a rope and the size of the second compared to yourself leading the rope.

How good is the team on their feet and their ability and overall experience?
Your route choice, the weather, conditions under foot, time of day.

The bottom line is - can you hold that person if they slip? If there is any doubt then run it out!

Drop your hand coils and move up to a spike or some other feature. If the terrain continues to be steep then drop the body coils and run the rope out even further, use a sling and belay the second up.

Keep things fluid and dynamic, trying to work one step ahead looking forward all the time. 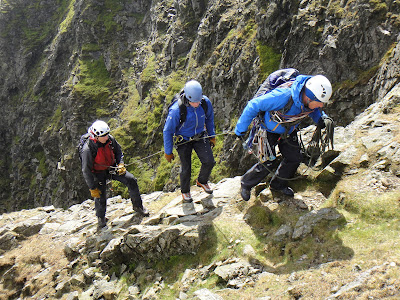 Tie the third person off to the end of the rope, using a figure of 8

If managing 2 people, take one and a half arm spans of rope from the end and then tie an overhand knot in the rope creating a large loop
Tie another overhand Knot right next to the first
Now with the loop pass it through the second persons harness and follow it back on itself creating a re threaded overhand knot
The first overhand knot can now be adjusted allowing the second a small amount of movement and comfort while moving over small steps

Taking coils and tying them off –

Tie onto the end of the rope with a figure of 8
The rope goes straight up the chest and around the back of the neck
With your left palm facing down the rope goes across the palm and then lifted back around the neck to make the coils.
Keep them reasonably snug as if they are too long they fall apart and get in the way and to short become uncomfortable if worn for any length of time.
Throw the coils now over your right shoulder
With your right hand grab the rope going to the second and pull it through the coils
You should now have a bite of rope that you can tie off around the rope going to the second with a stopper knot
Keep the loop small and tight, now clip it to the belay loop

This is without doubt the strongest way to short rope, using two hands so that the arms are bent to absorb shocks.

Hold the coils in one hand and control the rope in the other.
Moving uphill, the rope to the second must come out of the bottom of the controlling downhill hand - a firm grip is created by kinking the rope with that hand

On easy broken ground you the leader, through good communication to the second & third climber and a clear initial briefing can, move back and forth keeping tension in the rope at all times, safe guarding the team by –
Allowing the rope to ‘pay’ out from the coils in his/her hand and controlled by the controlling downhill hand as you move uphill over small steps
The rope can then be shortened again by the controlling hand keeping tension at all times placing coils back into the hand holding them and then sliding the hand back down the rope keeping the rope snug and taking in rope again as required.

As the ground steepens get the second to hold the rope around the spike safe guarding themselves and you can then run the rope out to the next feature and so on.

If in doubt run it out! 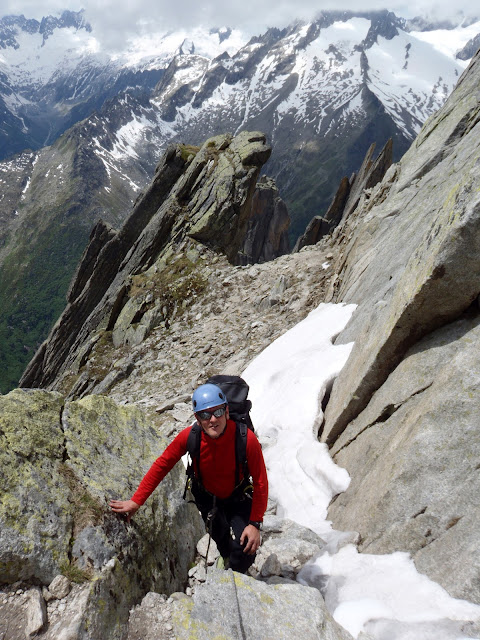 Having said that, try to keep the steps short to allow a good flow to your movement and purpose to the day

The less rope out the safer it is – less dynamic stretch in the rope making a slip easier to hold.
Running more than 4 arm spans out on a single person is when you should then be looking at the terrain around you, to work the rope around a spike or something – If the second or third person slips with too much rope out? then you have much more dynamic stretch introduced into the system & a slip is much harder to hold.

Other factors that you need to give thought to –
Is there 2 people on the rope and if so I may need to run it out on ground that I could move together on if I only had one person.
Even if I just have the 1 person – how heavy are they or how competent are they on their feet, the weather or conditions of the terrain I’m moving over?

On moderate broken ground where you can move together –

Keep the rope snug against the second with the controlling downhill hand – you can also use the snug rope to support yourself, giving you extra security and balance while you also move downhill.
Keep communicating to the second as to where he/she needs to go.
Don’t be afraid to work them one way and go another, working the terrain and creating natural features as security, also allowing you to see the way on and sometimes giving you an easier and safer passage down.
Any small steps wait for the second to step down by keeping a solid stance and letting the rope to run slowly through the controlling hand
Get the team to wait while you step down or to go slowly if the way on from there is just easy walking and it’s unlikely the team will slip and hence pull you off while you’re stepping down.
On steeper ground, get the team to be proactive and look for rock spikes etc to safeguard themselves while they wait and you down climb to them.
On longer sections where more rope is paid out or on steeper short sections, you will need to start working the rope around rock features as simple belays.
With a team of 2 you will need to start using simple belays a lot earlier.
As the ground steepens, the team becomes more tired, the ground becomes more exposed or/and difficult to judge & you the leader will need to protect each other more with belays, the second belaying you the leader down, lowering the team, you the leader abseiling..... 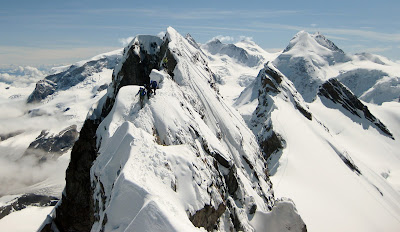 Only one man was moving at a time; when he was firmly planted the next man advanced..…Michael Croz stood below Hadow, placing the young climber's feet into the toeholds afforded by the sheer rock wall. Then, Hadow slipped and fell against Croz, knocking him off the cliff.

In another moment Hudson was dragged from his steps, and Lord F. Douglas immediately after him. All this was the work of a moment......

Scrambles Among the Alps. Edward Whymper. 1871. 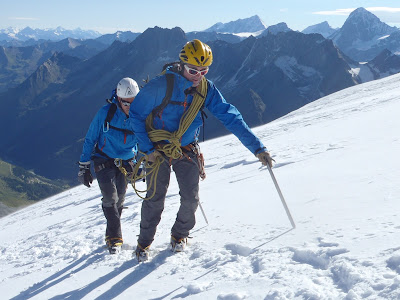 ‘’.....Both climbers were found dead, hanging on a rock outcrop, the rope correctly tied for short-roping“...........One climber must have pulled the other one off.....Watzmann East Face....had climbed it almost 300 times.....was well known as a very careful guide.....If anyone was familiar with guiding techniques, including short-roping, then it was.....Franz Rasp, the president of the IFMGA” 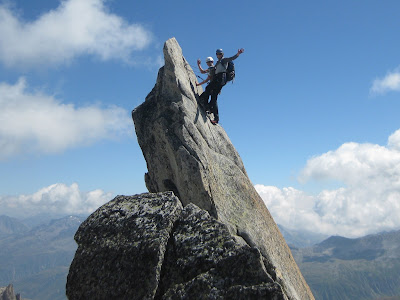