We headed back up Totem Creek, after a semi rest day climbing over in Field. Our old tracks clearly visible in the unconsolidated sugar snow weaving around the boulders in the creek bed & around Canadian Pines & Silver Birch growing thick & dense up from the banks searching for firmer ground. Wolverine tracks cut across ours in places where the ground was more open & trees less dense. We followed our tracks high onto the left bank to where the sun had the most effect, with the freeze thaw cycle giving us firmer ground again.

Still, the going was easier than when we’d hike in a couple of days previous. The temperatures had been minus 25 & the snow even drier & more unconsolidated with every step breaking through to the ground below. Higher now we could see the top of the route, white ice filling out a huge rock corner just above the tops of the pines.

We had a similar view when we first caught a glimpse of the same ice driving down the Icefields Parkway on the way back from Weeping Wall. We were heading back to Lake Louise when out the corner of my eye I saw the ice, between 2 trees. A split second & only a fleeting glimpse, but Ice all the same. It took a couple of seconds for the brain to process but yes it was Ice & yes I’d never seen it before & no I can’t recall seeing it in the guidebook. Stop!. Dean braked hard & pulled over. He looked across & new I’d seen something…. so he slowly reversed up, while I tried to find the 2 trees again. Stop! There it was the same view, Ice? We think so, formed? We can’t see, accessible? We don’t know, excited? Yes very! We headed straight back to Lake Louise to do some homework.

Now that same view is more obvious & all the questions answered well all apart from one – can we get to the ice? 3 days earlier we hiked in to within 300m of the base of the route & had to turn back, due to a huge snow slope which we thought was unstable & could avalanche protecting it. We headed back down to a sunny place in amongst the trees where we could see the route in full. So close but so far! We ate, drank & sat looking at the route feeling very frustrated at not even getting to the base of the ice & it & what an awesome looking line, but how can we get to it? The more we sat, the more we looked at the right bank leading up into the base of the route. The bank looked a little scoured of snow in places, with a possible line weaving around a rock pinnacle & then down to an unknown & out of sight section getting to the base of the ice. We race back down the hill, excited. 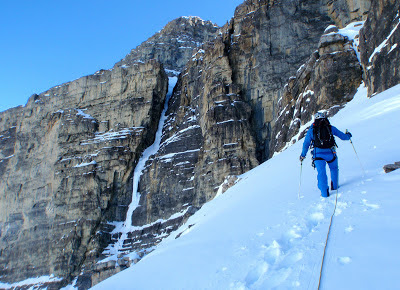 Today it feels different, it’s warmer, there’s a track in, we know the route’s formed, complete & looks amazing. It’s easier walking but the access is still not totally known, we march on in silence. We’re earlier, it’s 5am which we hope will give us plenty of day to play with. We start talking again, as we break off from our old track and onto unknown terrain again. Bad unconsolidated snow again but added to it a firm thick layer below that ‘whompfing’ with every step. We assessed the slope again & I head off alone while Dean holds back. We do this until we reach more scoured ground above & the way opens up. As the sun comes up we can see the slopes below the route more clearly & our old tracks just stopping in the middle of it all. Good decision! Yep!.

We find a flat spot, take the snow shoes off, put crampons on, harness up & get the rope out. The way on still looks good but it’s still the last unknown section out of sight linking our new approach with the base of the ice. We rope up & I head across very slabby looking snow & on over a crest, while Dean follows unclipping the odd wire I place for protection. We swing the lead & Dean heads over another snowy crest & out of sight into the final gully linking the Ice. Will it go? The rope goes tight & I follow. Deans set up a good anchor which I use to access the gully & test the deep & very wind slabby snow. I reach the other side & drill in a screw, continue on & then build an anchor when the rope runs tight. Dean follows, racks up with the rest of the screws & wires, swings by me, looks back & smiles……‘it’s on!’ 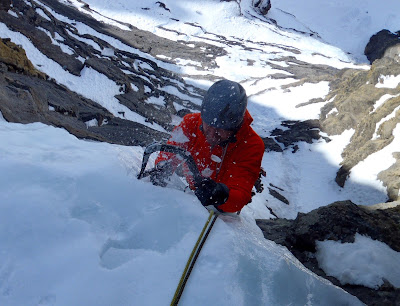