Back home now after a very adventurous week climbing in the Kamniske in Savinjske mountains of Slovenija.

We'd initially headed NW from Llubijana past Bled and up the Dolina Vrata into the Triglavski National Park, hoping to climb Triglav via a route on the North Face.
It's an incredible 1000m rock wall with routes of all grades that weave their way through some very impressive scenery and climbing.
I was there in the late 80's climbing with a then Yugoslavian climber Slavko Sveticicč and we climbed 2 or 3 routes linked together which took us directly up the centre of the face which unfortunatly I can't remember the name of now.
Every since that trip which was an extended time living with Slavko in his home village on the edge of the Julian Alps, Slovenija as it's called now has always felt like a special place.
They were very impressionable times in my life and the climbing defiantly left its mark and went some way to moulding me to who I am now.
I met Slavko in New Zealand 6 months earlier and we climbed together in the Mt Cook region, having success on some of the hard classics at the time -  South Face of Mt Hicks, Mt Cook and the Balfour Face on Mt Tasman......
I cut my round the world trip short, Arapiles would have to wait and I headed home with Slavko back to Yugoslavia where we hung out and climbed together for 6 months.

I'd been back the last few winters both mixed climbing and icefall climbing and also linking up as a side with local alpinist Marko Prezelj who new Slavko.
I enjoy the people and the special place they now call Slovenija, the mountains, forests, rivers and valley's, but I was lacking an understanding of the layout of the ranges you only get from going there in summer.

So back I went last week to try and fill in some gaps both in climbing but also in memory.

We pulled up in torrential rain at the alpine club hut and dried our gear buy the fire!
The next morning the clouds partially cleared and our dry rock was now covered in fresh snow! 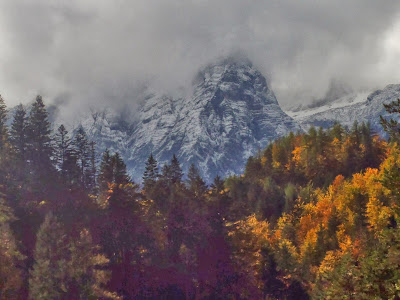 Our glimpse of Triglav's North Face on the first day

With it being North Facing and very cold there was no way this was going to clear any time soon so we needed a plan.
Marko had wanted me to explore north of where he lives in Kamnik in a range called the Kamniske in Savinjske mountains which he thought would be very interesting.
So we turned around, headed east to Kamnik and then North, then up into the Dolina Logarska, a beautiful valley leading up into the heart of the mountains.

It's such a beautiful area and a stunning drive over the tops, down and then following the stunning Savinja River which cascades down from it's source in the Kamniske Mountains.

From here we headed up to what we thought would be the main hut and climbing area. We packed stove, sleeping bag, food...........thinking that it would be like the main massif areas where the huts shut in September. No! the gaurdien was pleased to see us and was there until the end of October which gives you the idea of how long the season is here.

The best part was that he served food and we were the only customers!
We spent the rest of the week here, exploring the rock walls, mountains, crags and trails.
The more you see of the place the more you want to explore! 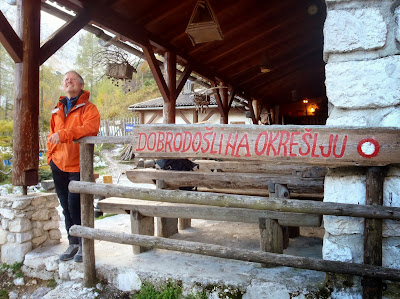 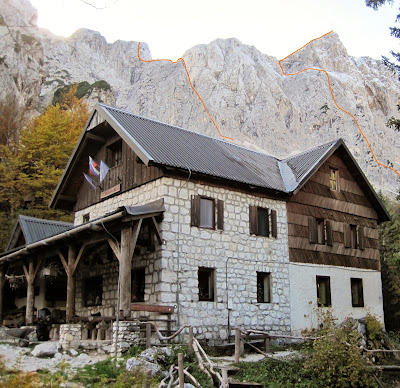 The Okreslju Hut with impressive limestone peaks all around.
A 40/60min walk behind the hut is over 80/100 routes!
The route on the left is - Szalay-Gerinov greben 400m on Turska Gora
on the right - Steber Stajerske Rinke 800m Stajerska Rinka 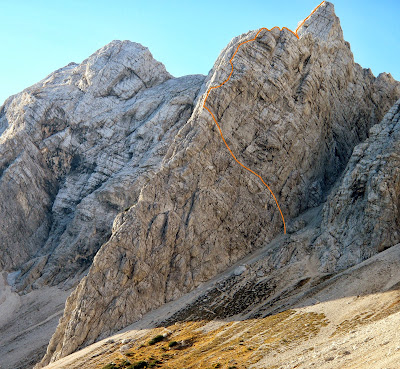 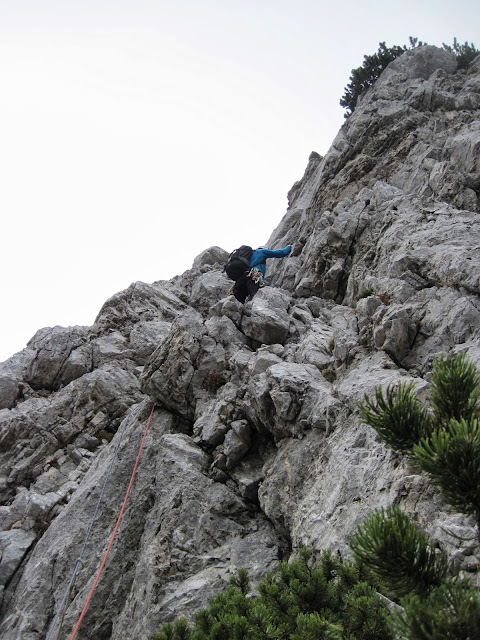 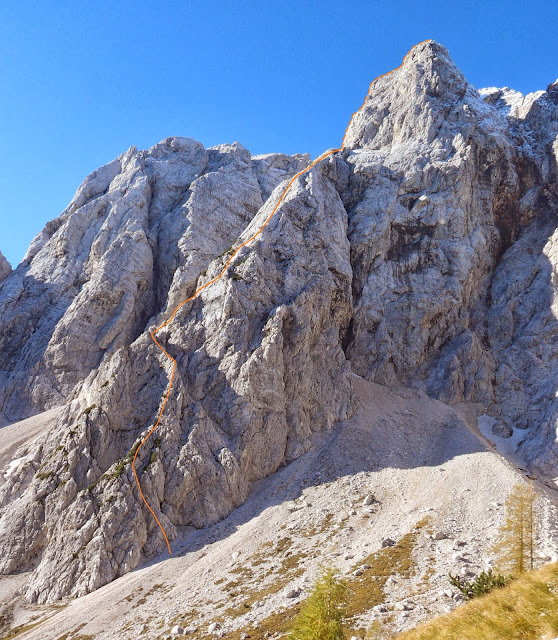 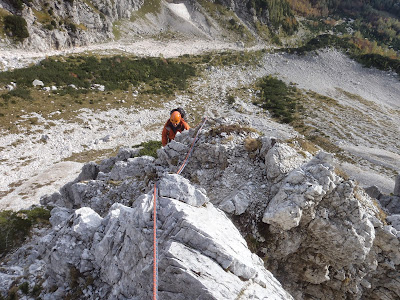 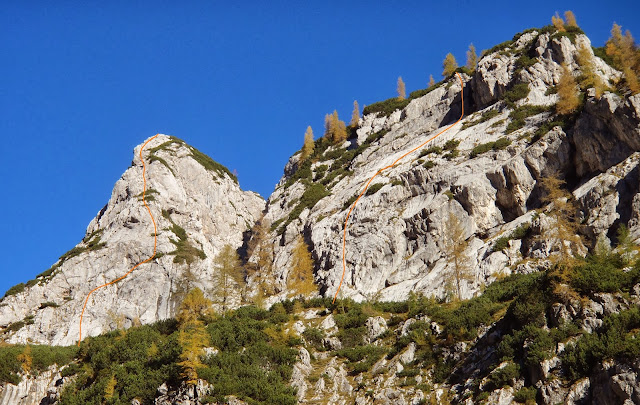 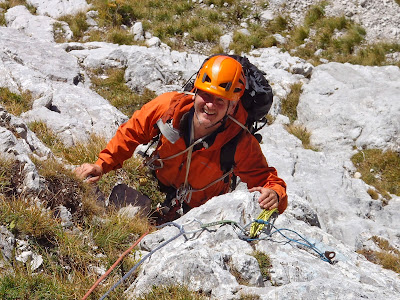 Adrian enjoying the climbing and sun! on Mrzla Gora 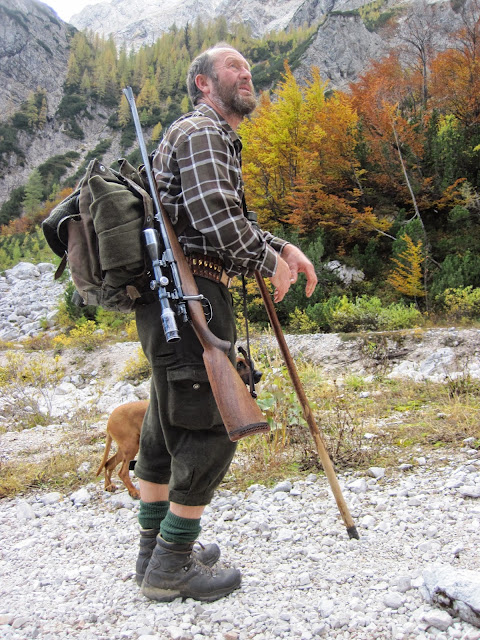 The only other people we met in the mountains were hunting for Chamois! 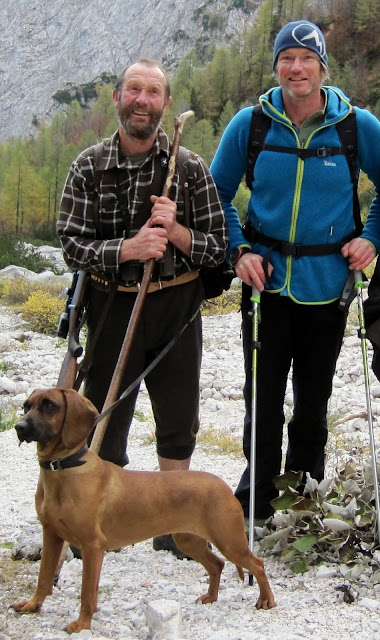 It's a lovely country and I've come away with loads of ideas for another winter trip now! Cheers Marko!