I was climbing over in Arolla yesterday where the ice was in fantastic shape with all the routes well formed and fat.

Having said that there's a massive thaw on at the moment with temperatures down in the Rhone Valley bottom around Martigney at 14 degress!

We chose Arolla due to it's high elevation and it was still around freezing when we arrived around 9.30am which was great. The temperature did rise to around 5 degrees which was ok if not a little wet but far better than other venues at a lower elevation. 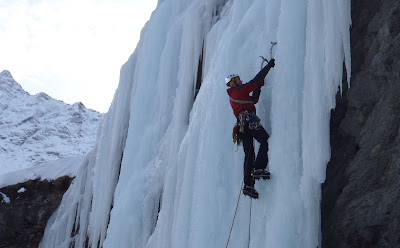 Bruce leading the first pitch on one of the tunnel climbs
﻿
It was a great day coaching/instructing some of the new BMG (British Association of Mountain Guides) applicants in icefall climbing.
It was great to be around these keen, highly motivated guys who are very accomplished climbers in their own right, but are just starting out on the BMG training scheme to become IFMGA Guides. 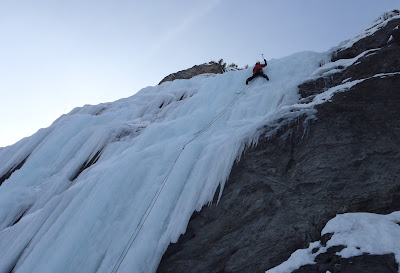 Bruce high up on the first pitch looking at client care & safety
We managed to cover most things surrounding guiding the icefalls in the day and if not, I gave them food for thought on area's to research and idea's/techniques to go away and practice.
It's such a massive subject surrounding the ice eg temperature effects, guiding techniques, client care, dangers....... and even if I'd of had them for three days it still wouldn't have been enough time. But having said that, these guys are like sponges and it's a great foundation for them with plenty of time ahead to build their experience. 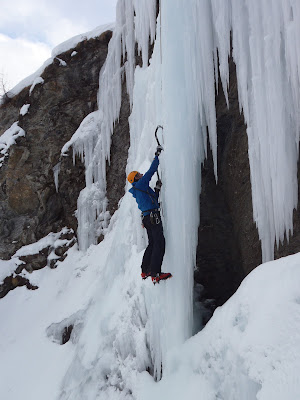 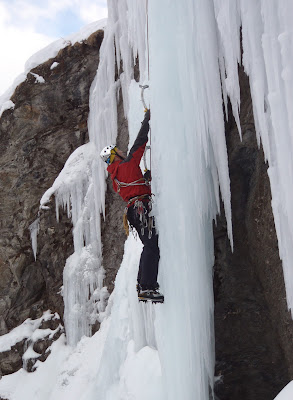 Bruce also enjoying the steeper left line teaching technique
The thaw has continued today, but it's due to go cold again monday and through next week. The low routes have all been effected by the unseasonally warm weather but the routes at the higher venues have been getting fatter.
So there's still plenty of ice around, more so than in previous years with a number of routes touching down and forming fatter.
Roll on next week!
Ade
Posted by Adrian Nelhams at Saturday, January 08, 2011