Well, it's fast approaching the Alaskan climbing season & Talkeetna will just about be stirring from it's hibernation, after the long cold winter months.
Talkeetna is about three hours NW of Anchorage at the foot of the Denali National Park. On a clear day Denali & the other giants in the range mark the backdrop to the village.

An overgrown airstrip sidles the main street which is home to a few forgotten & delaperdated small aircraft which lie rotting (or for sale!) behind trees. Disused railway carrages & old trailer caravans make great homes for many of the locals eaking out a living here. Wild looking dogs roam the dusty, potholed & untarmaced roads. Prefabrictaed wooden huts selling local gifts, books, coffee and eatery's selling mixed grills of Elk and Bisen line the one main streets all coming alive as the snow reseeds.

Then the constant drone of light aircraft indicate good weather in the mountains & climbers rush to the airstrip, weigh all their food & kit then wait in anticipation. 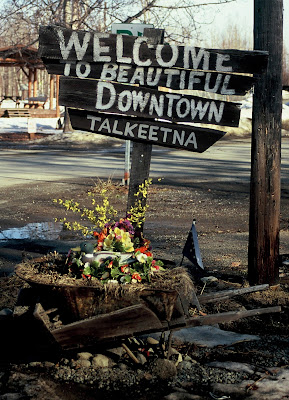 The Fairview's the classic locals hangout with plenty of beer on tap & a table tennis table to while away the long nights. Top tip - never challenge a local or bet on winning a game of table tennis unless you're feeling VERY lucky or play at national level - I lost badly! 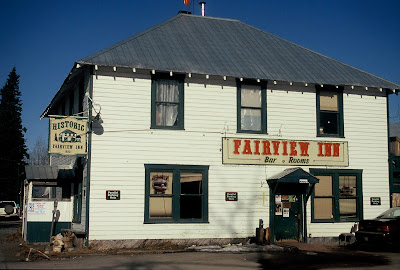 Paul Roderick & his superb team at Talkeetna Air Taxi, do a fantastic job flying climbers into all areas in the Alaskan Range. Paul a great character & probably the most experienced pilot flying out of Talkeetna, clocking up more hours than anyone to even the remotest glaciers & regions in the Alaskan range . A super friendly guy, always smiling and ever relaxed and calm even when the Twin Otters being thrown around by winds coming off the high mountains! Paul will always do everything he can to get climbers in and out even in the most marginal of conditions. 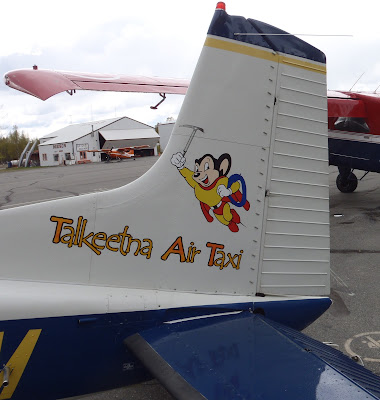 Sure the trip starts in the UK, but the real excitment starts when you're weighing in your kit & loading up the Twin Otter, taking off on the small Talkeetna airstrip and then heading into the mountains. 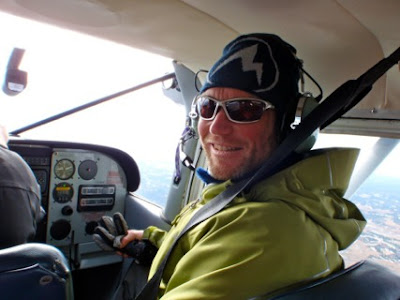 The scenary is just stunning with peaks that don't fail to inspire everytime you to look around or take another photo - you can't take enough photo's! 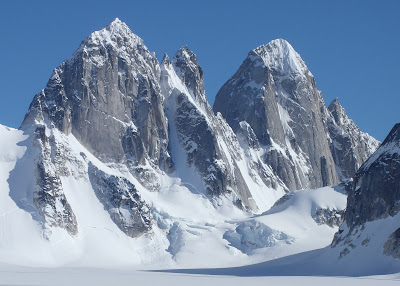 The peaks and faces look small on the flight in and it's only when you land and look around you do you realise the scale of things.
Then as the Twin Otter takes off in a low drone and fades to a speck on the horizon there's silence.
lt's only then everything becomes real - the place you've researched, the glacier, the peaks around you, the sheer size/scale and remotness of it all.
Then it hits you - that it is only you and you alone for the next few weeks, self relient & every decision you make whatever you do is your choice and with whatever consiquences that may follow. As Dean put it 'It's Indian country out here!' 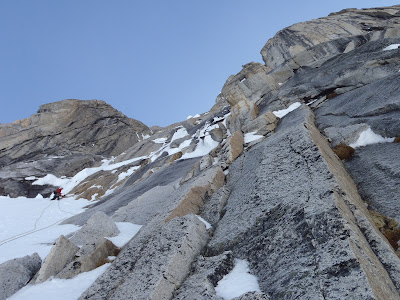 Steep and serious climbing really worked us hard on some of the pitches﻿ with subconsious thoughts nagging at us as to how remote we actually where. 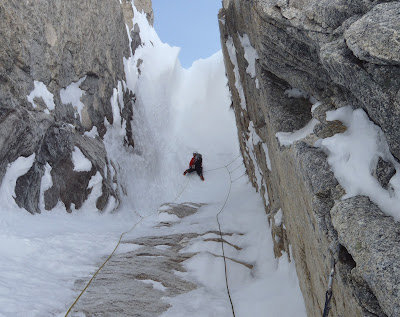 ﻿
It's such as amazing feeling, being up high in a remote region of mountains, tackling a new route or attempting to climb an unclimbed peak it's what adventure & friendships are all about. 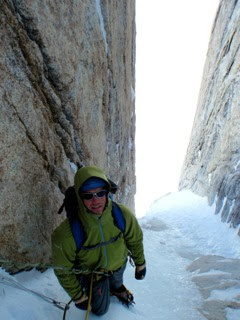 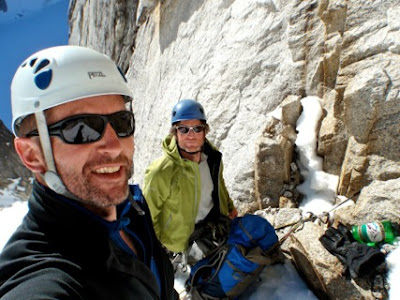 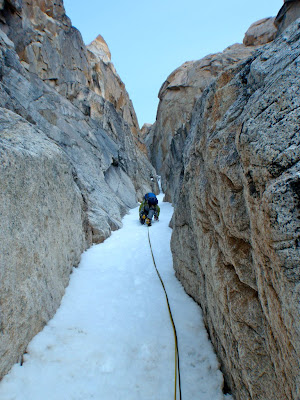 The views to more possibilities were both endless & inspiring at the same time. 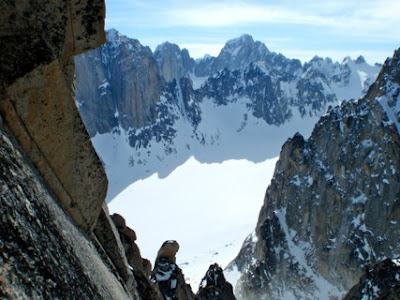 The granite was some of the best I've climbed on, clean, sharp and above all unclimbed!﻿ 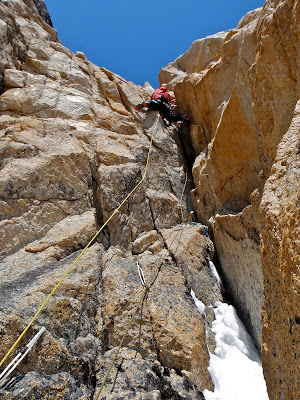 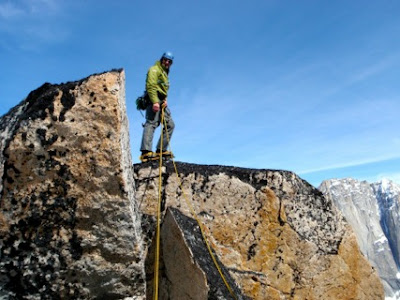 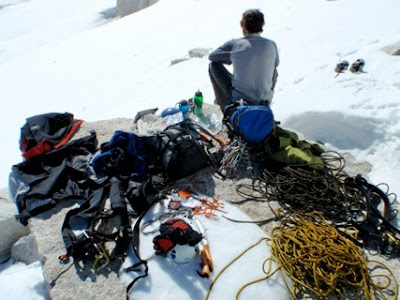 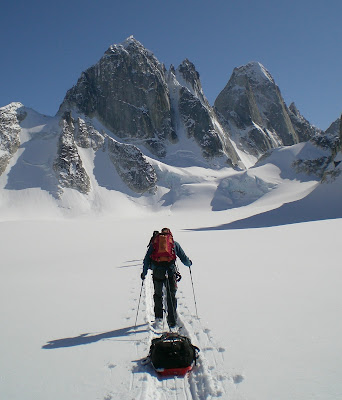 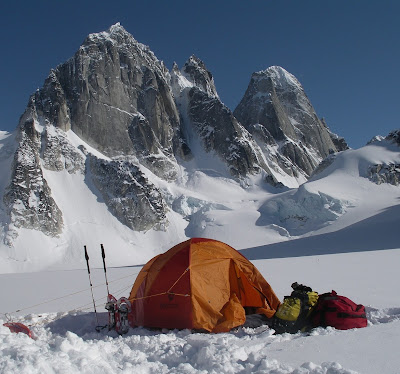 And some great food! fresh meat kept frozen in the huge freezer called the Tatina Glacier 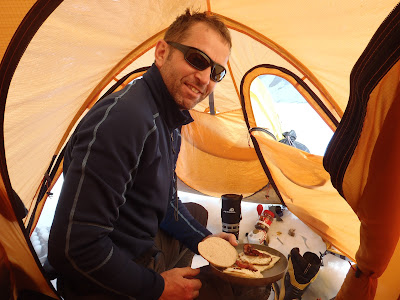 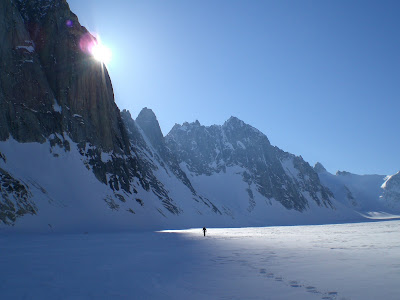 Great adventures and great climbing
﻿The drone gets loader and then we spot the Twin Otter a speck against the huge cliffs of Mt Jeffers. It looks so fragile as it sways ans then falls out of the sky and lands on our make shift runway in the new snow.
Paul jumps out smiling and taking pictures as it's a stunning day. Now were three.
We load up and 45mins later we're unloading on the hot tarmac which is the Talkeetna airstrip.
The Kitchatna's already felt a million miles away & our new surrounding and people a little alien. But a stack of pancakes with blue berry sauce, coffee followed but bacon ad eggs soon put that right and we sat in the sun watching the new world go by smiling.
What another great trip, cheers Dean
Ade
Posted by Adrian Nelhams at Sunday, January 30, 2011