The Icefalls around Arolla

Looking east to the Dent Blanche range on the way up to Arolla
Last week driving east along the Rhone Valley you could have been forgiven if you'd have thought that it was early summer. The snow had disappeared and the sun beamed down warming Sion to 12 degrees by lunchtime, it was unseasonally warm and had been for over a week now. Friends had been out cragging down in the valley and talked of warm rock and t-shirts. Here I was, winding my way south from Sion up into the Val D'Herren with thoughts of frozen waterfalls and some great icefall climbing.

The views were amazing and one of my favourite 4000m peaks stood like a giant above Les Hauderes. The Dent Blanche is just such an inspiring peak, we could have just stood there for hours starring, wondering, imagining & making plans for future adventures. 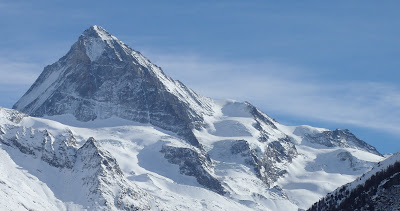 The Dent Blanche
But we where here for the icefalls and the day was already warming up. We chose Arolla for the obvious reason, it's high in altitude with all the climbs around 1900m/2000m﻿.
We warmed up with the lefthand of the two Tunnel routes which form just above the road, which looked in great condition when we were driving in. 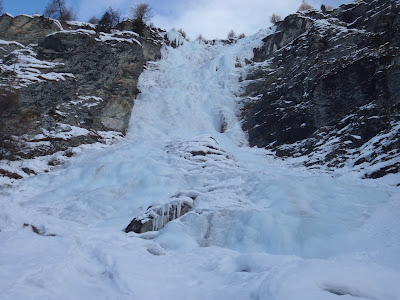 Tunnel Lefthand
The ice was in great condition. The flow was wide enough that if there had been three teams turn up at the same time, you could of all climbed it at the same time on three independent lines! It was fantastic climbing and we climbed it in three long pitches. 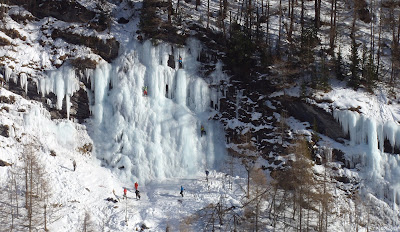 La Gouille
We stayed at Pension Lac Bleu which was opposite a great little ice climbing area called The Gouille. La Gouille's perfect for a day working technique and practicing leading which folk were doing when we arrived.
Just to the right of La Gouille is a long winding 400/450m gully that winds it's way up the mountainside under the Dent de Veisivi which looked fantastic. so we set out early the next morning to explore. 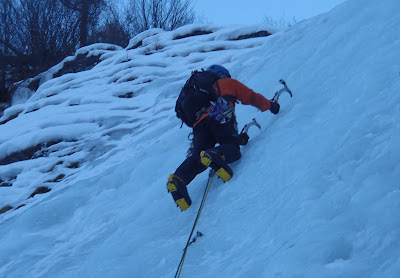 It was an opportunity for Adrian to practice his leading and for us both to wonder what was around the next corner. 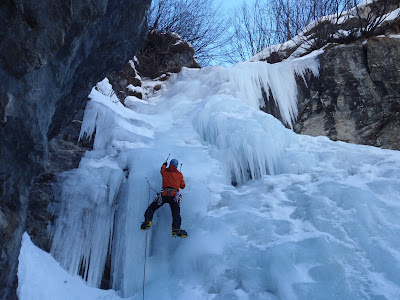 The narrow gully was filled with snow separated by steep ice steps around blind corners, it was great fun.
The gully continued behind the back of a huge steep rock buttress where we saw two Eagles just floating on the warm thermals 80m away, it was an incredible place. 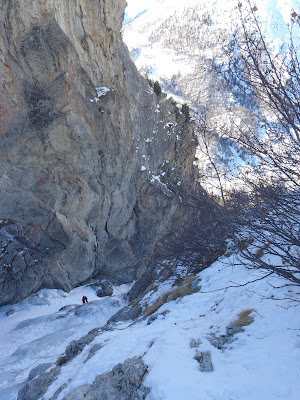 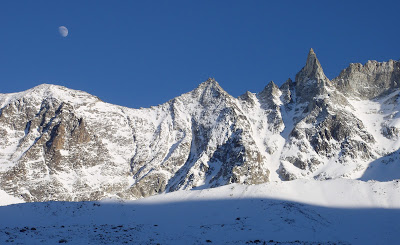 The Dent de Tsalion and the beautiful Aiguille de la Tsa
The next day we headed up the valley to Cascade Usine Electric which was probably the fattest I've ever seen it! 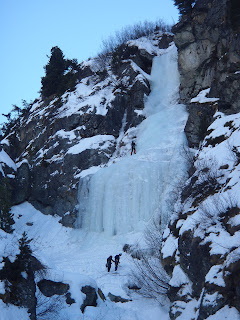 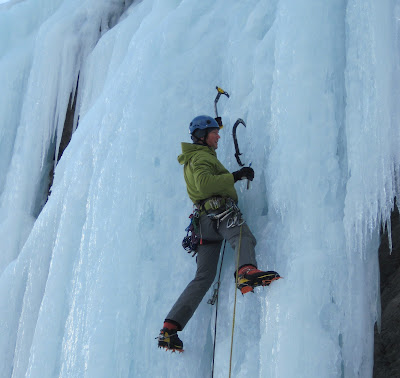 Me teaching leading
We had a great day where I feel Adrian really turned a corner with his personal climbing.
The following day we headed back down the valley a short way and climbed the Righthand Tunnel icefall. 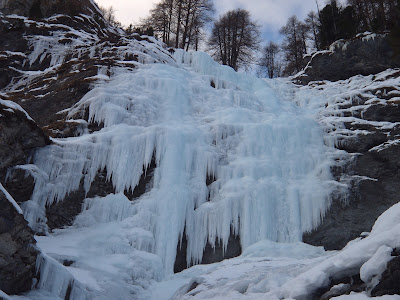 Tunnel Righthand
The route was again in great shape with fantastic climbing on the steep first pitch which lead into an easier second pitch with another steeper pitch to finish. 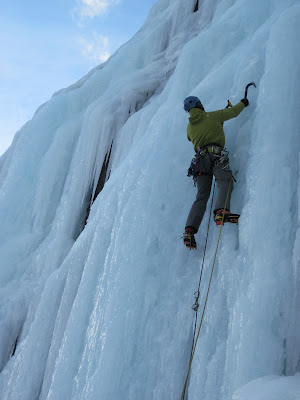 Me leading the first pitch on Tunnel Righthand
The climbing was more technical today as the temperatures fell sharply overnight making the ice very hard and brittle. You had to really work any pockets or small features not to fracture the ice and you needed a lot more care in your footwork, as the crampons were only just finding purchase on the very surface of the ice and could easily skit off. 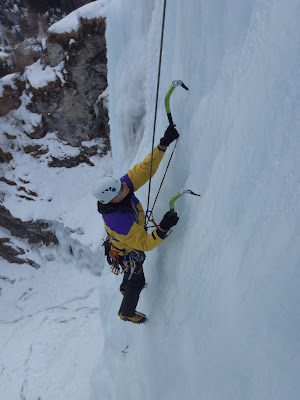 A team starting up the first pitch of Tunnel Righthand while we were abseiling down.

Adrian sorting kit at the base of the route.
Further down the valley in Evolene the classic Cascade Coop just above the village was hanging in there despite the warmer temperatures and the fact it gets a significant amount of sun in the day. 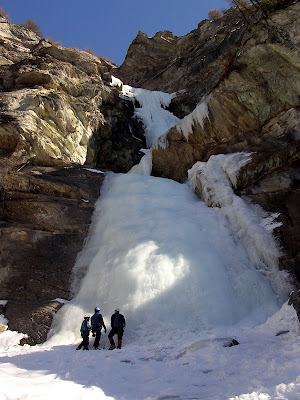 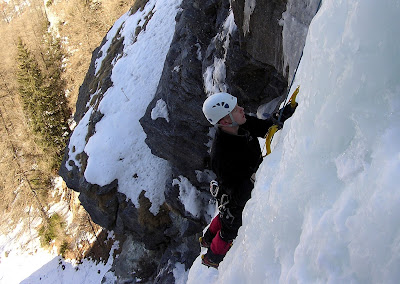 Will seconding the top pitch of Cascade Coop
We had a great week with some fantastic conditions although we were high, back down in the valley driving home it was 12 degrees again. Lower areas such as Kandersteg have had a real hammering as have any routes at lower altitudes below 1400m/1500m or routes that get a lot of sun.
Having said that It has started to go cold again and the forecast is for it to get colder. A slow freeze will be great, creating more ice & bringing routes quickly back into condition again - fingers crossed.
Be careful though - I spoke to a friend in Cogne today and he said that it's also been very warm over there as well, but last night it was minus 19! - these quick overnight massive swings in temperature can make steeper routes super fragile - be careful.
Ade
Posted by Adrian Nelhams at Thursday, January 20, 2011