With the warmer weather in Kandersteg, we headed over to Cogne for the last few days of last week.

Snow fell as we drove over the Grand Saint Bernard, which felt strange after it having been so dry & sunny for so long.
It was still snowing as we parked up in Lillaz at the entrance to the valley of Valeille, a few kilometres up the road from Cogne. We headed a short way into Valeille & took the steep but short track into E Tutto Relativo.
We passed a number of teams on their way down & seemed to have timed it just right as we had plenty of time and the place to ourselves. 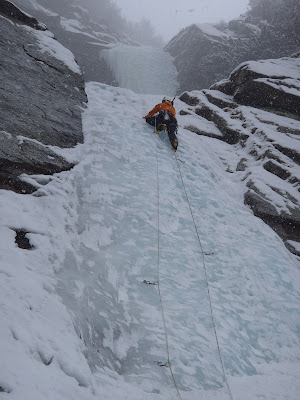 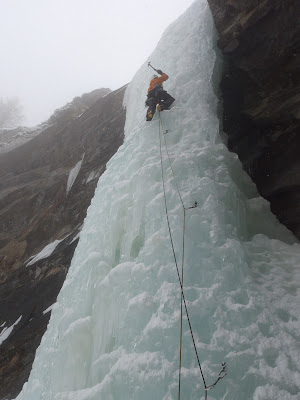 Colin heading up the 2nd pitch of E Tutto Relativo
The following day we made an early start & headed up into the back of Valnontey to have a look at Repentance Super.
The cloud was down and it was still snowing gently as we left the car. We headed up the valley, making fresh tracks in the new snow as we went. There wasn't a sole around and it felt like we had the whole place to ourselves. 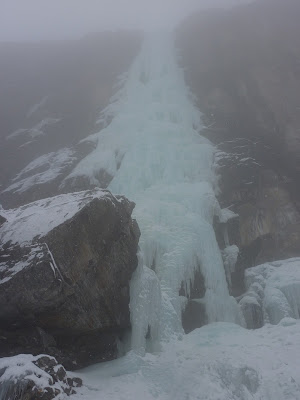 Our only view of Repentance Super towering steeply above us
The route looked in great shape, although on closer inspection it was actually very wet & running with water. It had been warm & cloudy the previous day, cloudy again overnight and the ice hadn't re frozen. Routes like this one & Rubezahl over in Kandersteg do take a huge drainage and will often be wet without a good freeze. But on the warmer side of just wet is when you do need to be very careful, as the ice becomes very blue & the sheer weight of the ice saturated by a higher water content can bring these super steep free standing routes down.
Anyway I headed up and got absolutely drenched working my way up newly formed icicles & fragile chandeliers which had formed over a foot thick, on top of the old ice, making it difficult to get good axe placements & solid screws.
I worked further right & managed to get a belay on the right edge of the flow out of the water and away from all the newly formed fringes of overhanging ice. 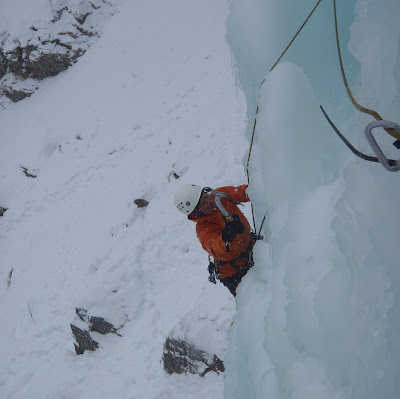 Colin seconding the 1st pitch of Repentance Super
Looking back across at Colin, the ice looked very blue & completely saturated with water. The whole icefall looked very heavy right through to it's core.
Colin joined me drenched & wondered if we should bail from this point. Looking up, the ice looked overhanging it was that steep with fringes formed over the top of ice bulges re frozen with more fringes formed over the top of them.
Anyway I thought I could see a drier line up the righthand edge which would go, so I headed off. 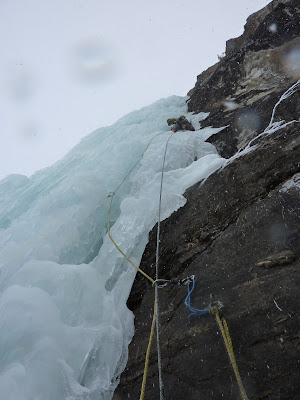 Me heading up the 2nd pitch of Repentance Super
The climbing on this route is just fantastic, totally absorbing, steep, strenuous and very athletic in the climbing. As well with that we found the ice very fragile, super hollow making it difficult to get good axe placements and solid screws in, due to the fact the ice we were climbing on was newly formed over the older more solid ice.
Steep sections of bulges and fragile fringes kept pushing us out making the climbing steeper & overhanging in places.
I started up the third pitch on an overhanging bottomless fringes of ice 10m in height before it filled out and joined the main flow. I quietly stepped up onto the thin icicle points free hanging 90m off the deck on hollow axe placements where you could see the axe picks through the other side of the ice. But I was heading for safer ground and half way up the curtain managed to get a solid screw.
I wasn't sure whether the route would go or not, until I pulled over the top - awesome. 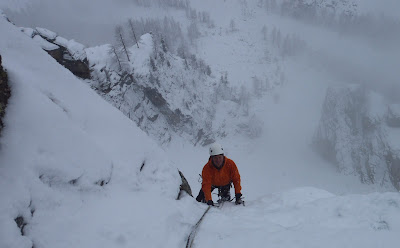 Colin pulling over the top of Repentance Super
What a great day, we got back totally knackered by enjoying the glow of having climbed one of the great classics of the area. It's amazing how the ice can change as I've climbed the route before but it's never felt that demanding before & I'm sure another day it'll feel different again.
The following day we headed up and climbed Lillaz Gully. It wasn't a come down after the day before even though the route is a lot easier technically as this is one of the best ice routes of it's grade in the valley with a real mountain route feel about it. 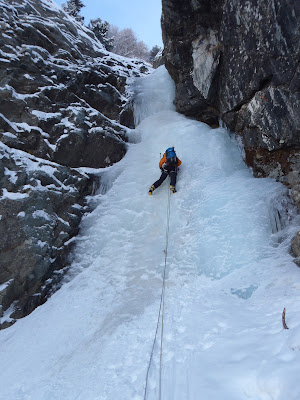 Colin heading up the first pitch of Lillaz Gully 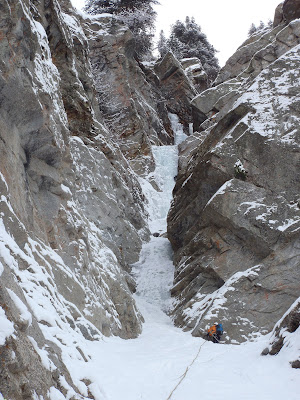 Looking up at the upper pitches of Lillaz Gully 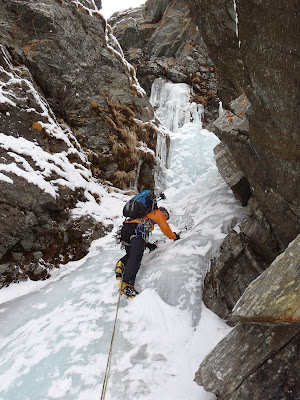 Colin heading up one of the upper pitches of Lillaz Gully 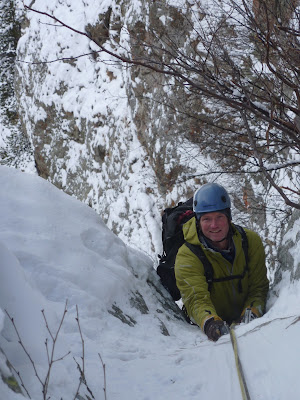 Me pulling through the narrows on Lillaz Gully
The last day we drove down the valley towards Aosta & climbed a great route up the side of and above an avalanche tunnel. Sounds noisey but actually is a superb route and in great condition this year. A steep first pitch grade 4 leading to two easier pitches of 3/3+ above and then a couple of grade 2 pitches above those if you're not to pushed with time. It was great for Colin to finish off the week doing some leading.
We had a great week and an inspiring drive back to Switzerland, already making plans for the summer and next winter again!
It was an even longer drive for me, as I dropped Colin off and then made my way back to the UK, as I'm up in Scotland next week and then over in Canada icefall climbing for 2 weeks after that.
Now I'm enjoying some time at home.
Ade
Posted by Adrian Nelhams at Friday, February 25, 2011