Unbelievable weather here in the Lakes at the moment, it’s really felt like summer. You have to pinch yourself that’s it’s still only the middle of March, although the clocks have just changed which has given us an extra hour cragging in the evening!

A frustrating day on Thursday, which was also glorious weather day at a very dry Malham. 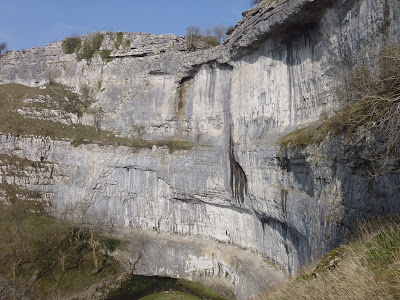 Malham Cove
The day had all the ingredients for a great climbing day, although I ended up jumping on a route which my fingers weren’t reading for this early in the season, rather than building up some mileage on slightly less steep ground which at least would have had some holds on!


Having said that we had a good work out on a couple of other routes, although I’m still ‘sans’ project for the year, which was the main reason for heading over there. 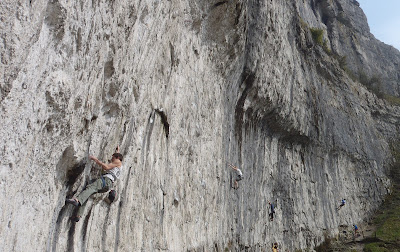 The weather attracting a few teams out early season at Malham
Heading home from Malham, Woody rang me wanting to do a route over at Humphrey Head again. So I had a coffee at the Devils Bridge Café at Kirkby Lonsdale & then headed over to Grange to meet him.
I could hear the music half a mile away! The Fiat pulled into the carpark & Woody couldn’t get out quick enough! He was literally hopping towards the crag trying to get his rock shoes on at the same time while uncoiling the rope! He is just super keen at the moment which is fantastic & infectious!


Woody cranking it out on 'Shot by Both Sides', Humphrey head.
Roll on when they re-bolt Humphrey Head - beware, the in-situ gear is shocking!


The following day I headed up onto Raven Crag, Langdale with Ritchie who’s come down from Dumfries for a couple of days. We did a route on Evening Wall & then headed up onto Gimmer Crag. 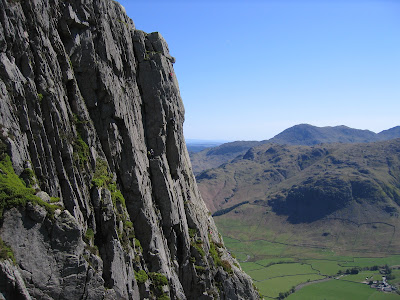 The awesome Gimmer Crag, Langdale
Ritchie enjoying Gimmer Chimney, Gimmer Crag, Langdale.
Gimmer was sunny, warm & surprisingly quiet with no other teams around to spoil the adventure! We climbed Gimmer Chimney, the classic at it's grade on the crag & then carried onto the summit. We the then descended back down to Raven Crag & finished up the classic Bilberry Buttress which was a great route to finish a great day on.
The classic Raven Crag in Langdale above the Old Dungeon Ghyll Hotel/Pub 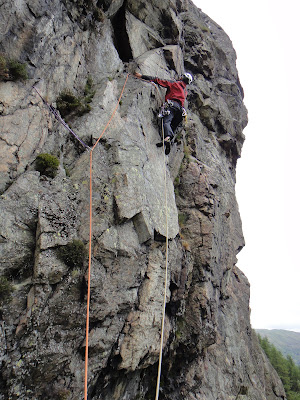 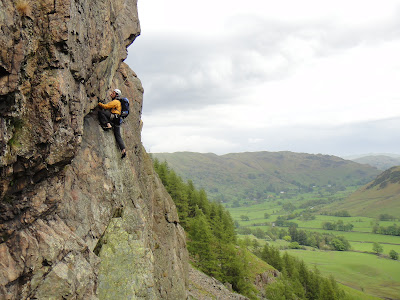 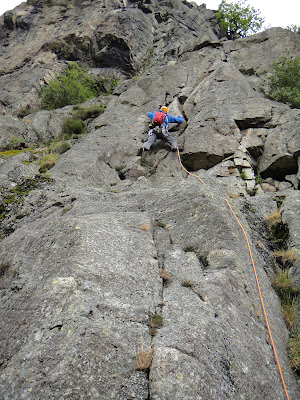 Bilberry Buttress, Raven Crag, Langdale
I met Ritchie again Saturday morning & we headed over to Coniston. We walked into Dow Crag via the Walna Scar Road & on up to Goats Water which sits just to the East. The crag just towers over the high mountain tarn or water! which separates Dow Crag from the popular walking peak, the ‘Old Man of Coniston’ further  to its East. 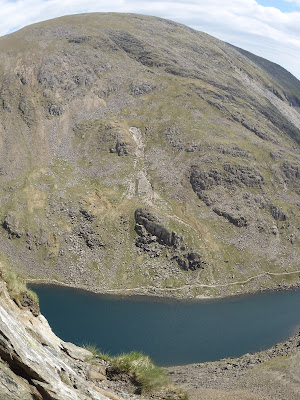 View of Goats Water from Dow Crag with the summit of the 'Old Man of Coniston' behind
Again, just fantastic weather, warm rock & adventurous climbing.
Ritchie enjoying the exposure high up on Dow Crag
Dow Crag is just a fantastic mountain crag with long adventurous routes on great rock in the a higher mountain setting. We climbed a couple of the classic long multi-pitch routes on both ‘A’ & ‘B’ Buttress's before walking off the top, down & over to the summit of the ‘Old Man of Coniston’ to finish the day. A great finish or was it the beer down at the Sun Inn in Coniston! either way a great couple of days - you've got to love the Lakes when you get weather like this, the climbing is second to none.


It was 25degrees in the sun, in our back garden yesterday!
Encore beau soliel today & my phone bleeps to an incoming text as I'm sat here at home in the office.
'You out tonight?'
Woody's name comes up attached to the number.
I can feel his enthusiasm coming through. I know he did a new route in Borrowdale on Friday, although I've yet to find out the details. He's on a roll, so I tentatively reply 'Reecastle' as I know it's steep, hard & it's my lead!
'Great, see you at the shop - Woody'

I've gone from office work to sorting my wires out!