A mixed week in the Alps

Unbelievable weather in the Alps this week.
We sat in Chamonix on Friday drinking a beer in the sun & it was 16degrees, too hot to wear anything more than just a t-shirt! Down in Martigney in the Rhone Valley you were looking for shady routes on the rock as it was a blistering 20degrees!
Unbelievably hot for the end of February & the beginning of March & too hot for any steep ice routes, or any ice routes come to that which get any sun and are below 2000m & aren’t threatened by sunny slopes above & are still there! & as we also found out, just too hot on Friday to climb a big mountain route.
Having seen Crack Baby back in January & noting that it looked in pretty good shape, also hearing that since then conditions in February had improved considerably with most routes low down forming well with some routes forming which rarely do, I felt that Crack Baby was a sure bet & a great option in warmer weather being at 2000m. It’s better to have the steep ice & pillars which form on the warmer side of cold relaxing the ice making it safer & more enjoyable to climb.
We warmed up on Namenlos in the afternoon which was wet but felt pretty safe in the warm conditions 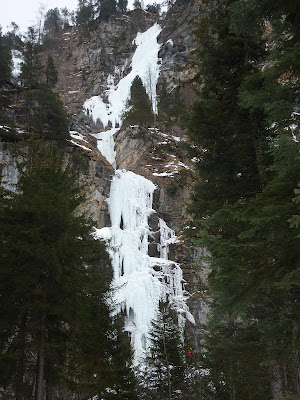 Anyway I was wrong! I can only imagine that the super cold spell in February with temps of around -24degrees in kandersteg formed up all the lower level routes, but must have been too cold for the higher routes such as Crack Baby which must have just cinched up & not changed at all.
This coupled with a warm week leading into this one now the lower pitches looked a little thin & patchy but the crux was a section I was looking at in the middle of the route which hadn’t formed well at all. 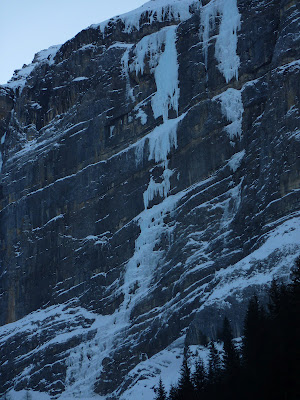 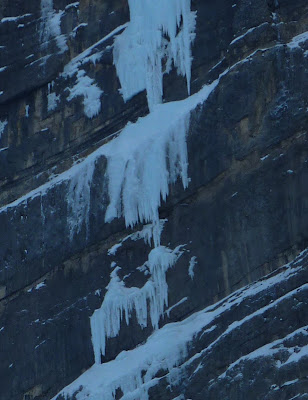 The very thin middle section of Crack Baby, Kandersteg
The fringe coming down wasn’t connecting with the ice below. At first glance it looks all there but on close up the ice underneath the fringe is just plastered to the back wall & isn’t touching at all.
In general the route looked thin & grey in places & generally hadn’t formed well & with this section highlighted above we decided to head back down the 1000m climb from the valley to look for other options. 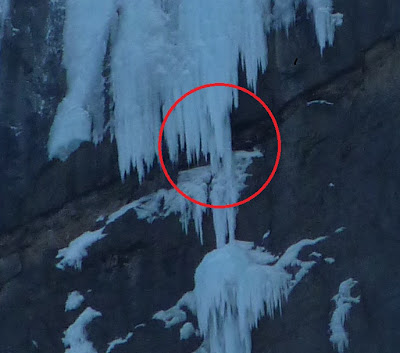 It was scorching when we got back down the Valley but we headed up to take a look at Rubezahl & Blue Magic up in Oeschinenwald, just above Kandersteg.
Blue Magic was formed but thin, as was Rubezahl a little higher up the Valley. These routes are steep & coupled with the fact they haven’t formed as fat as in previous years (they formed over a 2/3 week period) so any warm weather will affect them a lot quicker. It was too hot for these steep routes today, they were absolutely steaming with water, you’d have needed a snorkel & mask just to see where you were going on Rubezahl! 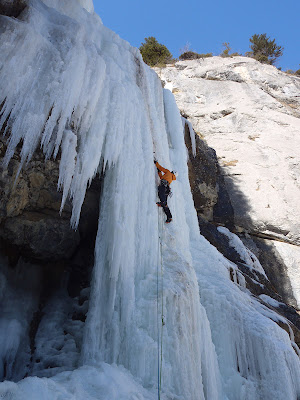 Great conditions on Namenlos 80m grade 4, higher up the valley, Kandersteg
We ran away & found a great 2 pitch route which get only a little run further up the valley of an easier grade where a lot more of the weight is being supported by the ground under the ice. It was a great route which felt safe in these difficult & super warm conditions. 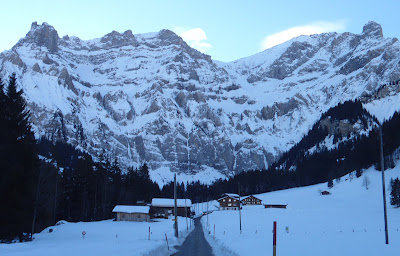 Left is Lurking Fear 120m grade 3+, then North Shore 275m grade 6 which isn’t formed, then Stundlich Grusst Die Staublawine 70m grade 5+ which is also unformed & furthest right is Glucksritter 230m grade 5
So we turned tail & headed over to Cogne which has routes around 2000m & one which we wanted to climb which was Cold Couloir a classic 600m ice route of grade 4+ which I felt would still be in good shape. 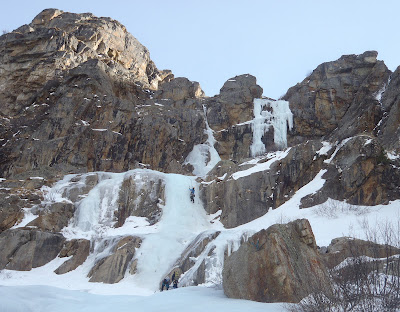 The top pitches of Patri 250m grade 3+ to 5+, Valnontey, Cogne
We arrived late into Cogne but raced up Valnontey & climbed Patri as it was getting dark walking back to La Barme with our headlamps on but feeling much better for getting on some good ice. 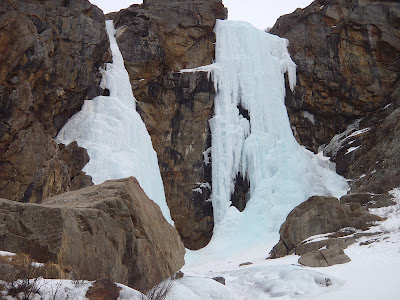 A view of the last pitches of Patri, they all have the same pitches to start then take independent lines for the final pitches with Patri a Gauche grade 3+, in the middle Patri Direct grade 5+ & Patri a Droite grade 4+
The following day we headed up Valeille & had a fantastic day climbing Cold Couloir. 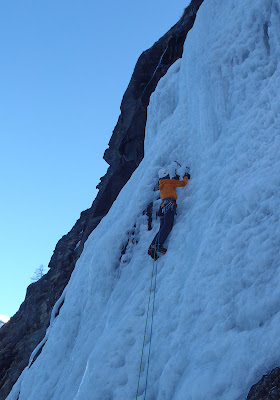 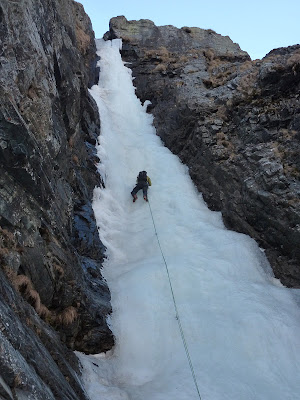 Me leading the 2nd long pitch on Cold Couloir 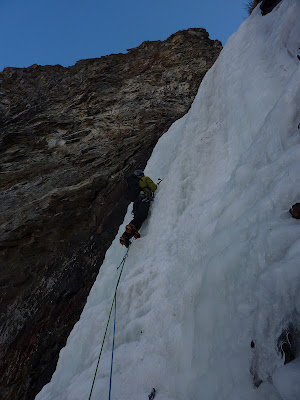 Me leading pitch 7 on Cold Couloir 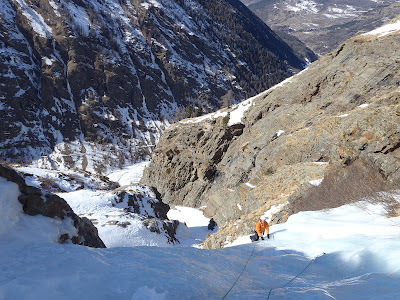 Colin seconding the final pitch of Cold Couloir, Cogne
But I felt that this also was the last day of ice in the Valeille, everything else was falling down & sun affected & it was 14degrees in Cogne when we got down.
There wasn’t much else for us in Cogne & with the weather getting hotter by the day we decided to sack the ice & head into the mountains.
We organised ourselves on Thursday & bought bivi food, packed sleeping bags, stove & planned to head up onto the Argentiere glacier & head up to climb the Ginat route on the North Face of Les Droites.

A fantastic view up the Argentiere Glacier with Aiguille du Chardonnet 3824m on the left, Aiguille d’Argentiere 3902m in the middle & the striking pointed summit of Mont Dolent 3823m at the head of the valley.
We walked into the Argentiere hut as the winter room is open year round. The hut was full of ski tourers & we were the only climbers which surprised us as the forecast was sunshine & blue skies where else would you be? 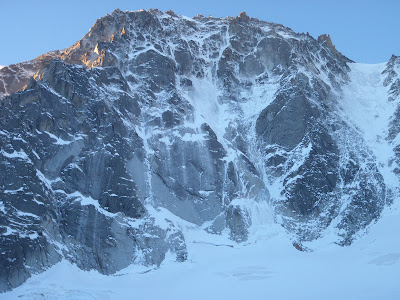 The Classic 1200m North Face of Les Droites 4000m
Just below the rimaye the white snow was being peppered with stones released from above. We stood underneath the steep overhanging wall of the rimaye which stood between us & the start of the route & the stones where ricocheting down & clearing over our heads. It was still dark & I thought it will only get worse as the day warms up. The freezing level was around 3600m. The rimaye was like a wave of soft snow, steep at the bottom & overhanging at the top with layers peeling off it also looking like thin waves within the big wall of the wave. It was a wave of about 10m which I needed to climb to exit out left onto easier angle snow & the gulley above.

A close up & foreshortened view of the 1200m La Ginat ice route grade IV 5 on the North Face of Les Droites, Argentiere, Chamonix
I stepped up onto the white wave of snow curling up above me & I was immediately arching my back trying to weight my feet as my axes where just slicing through the soft snow with no purchase to take any weight, the snow under my feet kept breaking away. I looked for a screw placement & then smiled at the ridiculousness of my thoughts. I could see where I needed to go & if it had frozen overnight I’d have been in with a fighting chance. It was the only way up & over, every other way looked even worse.
The sun was coming up & more stones ricocheted down from above.
The soft snow mean’t that even if I was to be able to inch my way up to the overhanging lip of the wave, it would have been far too serious pulling over the top to get to the easier angled snow above.
My mind switched back to the stonefall which may only get worse, then to the heat of the day, then back to the steep overhanging soft snow at the rimaye, then onto the long descent of the sunny south side & the potential hazard that was going to be.................
Disappointingly we turned around & headed back down the glacier.

Some great morning light catching the Grande Rocheuse 4102m below the Aiguille Vert & the super classic 1200m  North Face of Les Droites on the left still in shade.
We hung out for a while watching the sun come up hitting the tops of the peaks & felt good again!

Looking back up the Argentiere Valley, Chamonix
Back down in Chamonix it was 16degrees in the sun! it was too hot for this route today.
Next time.
Ade
Posted by Adrian Nelhams at Sunday, March 04, 2012