The screech of tyres as the Panda broadsides up the steep corner past the Golden Rule & on up to Woody's house. He's already phoned me once to see where I'd got to & I was only running 5 mins late! We were on a tight schedule though, as the only time we had was in-between school runs & I had to get back to Sedbergh. Waiting impatiently! beside his newly acquired caravan was Woody, bags in & we're off.
It's still cool for May & it's been raining off & on a lot, so we wanted somewhere close & accessible due to the time constraints but also dry & dared we think it? in the sun!
So we headed up into Langdale, parked at the New Dungeon Ghyll & headed up to Middle Scout. 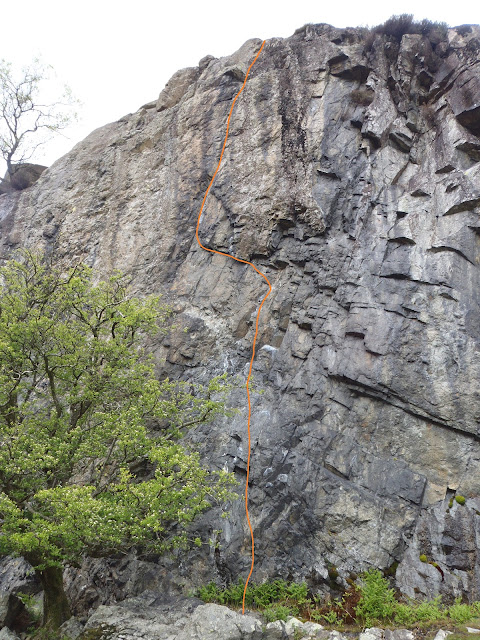 The line of Elvis E5 6a on Middle Scout Crag, Langdale

The crag's a black outcrop of volcanic rock (part of the Borrowdale Volcanic Group) & all the routes here are steep & very strenuous. We were keen to get on the classic E5 which is Elvis. It's a route which as soon as you're off the ground the steepness of the route starts to sap you energy & the route just gets progressively harder! You undercling a flake & then follow a thin crack up to where it peters out & some big moves reaches easier ground above, but the lay aways are poor & the gear hard to place & blind at times.
It's a fantastic pitch of climbing which woody first led, inspiring me to pull my finger out!
Woody did a great job on it. My turn & I have to say I was working hard to catch the final holds & sink the jugs at the top, but I got it! - A great pitch & super happy. 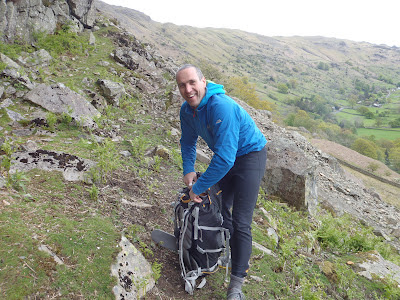 Oh no that wasn't enough though! We had an hour left & I was thinking coffee down at the New Dungeon Ghyll, basking in the joy of having just dragged myself up a steep hard pitch & talking the moves to death. Woody had different ideas, so we throw everything in the sacs & legged it back to the rod & headed down to Chapel Stile.
Woody was now on a mission, we parked up below Raven Crag Walthwaite & literally ran up to the crag, time was definitely against us & it was now spitting with ran. Black clouds were threatening to discharge heavy ran but it was just the light stuff so we racked up & headed down to the base of 'Into the Light' E5 6b.
This I new was a very committing route, Woody couldn't deny that as it's there in black & white in the Langdale guidebook! He'd done the route before though & was fired up to do it again & thought it'd be right up my street! Can't think why as all the rack consisted of was a medium size friend! The friend went into a small pocket low down on the route & the rest was up to faith & friction!
A very awkward start led to vague ripples for feet & small, difficult to hold crimps for hands which gave way to some hard pulls & high steps on this steep overhanging route. A high rock over gave way to easier ground & eventually the top - fantastic, Woody said I'd love it & I did! I was stoked to get up it in good style. It was run out & very committing, a fall was unthinkable but what an awesome route. Woody also led it, & actually climbed it first, I needed a bit more of a physic up first, which Woody definitely helped with!
Great day Woody and we're both back in time for the school run & us a play in the Sedbergh park! 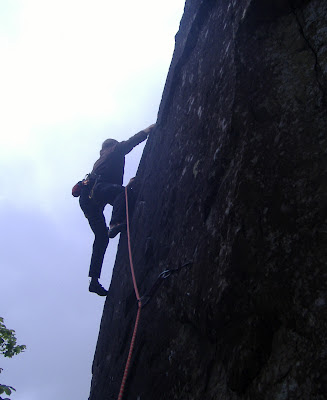 Me, high up & committed, leading 'Into the Light' E5 6b, Raven Crag Walthwaite, Langdale

Looking forward to our next foray!