Over on Dow last Sunday. 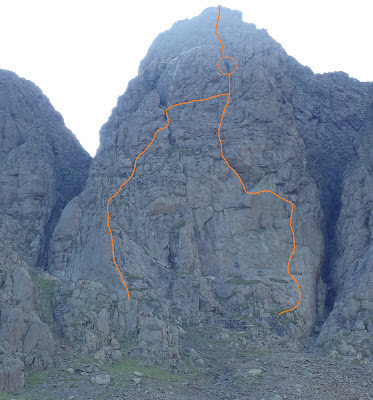 Dawn's first day climbing outdoors! - great fun climbing the classic Arete Chimney & Crack and Eliminate A, which weave their way up the steep overhanging rock on 'A' Buttress.

Monday, we hunted out the shade & headed up to Borrowdale & climbed the classic Troutdale Pinnacle Direct VS on Black Crag. 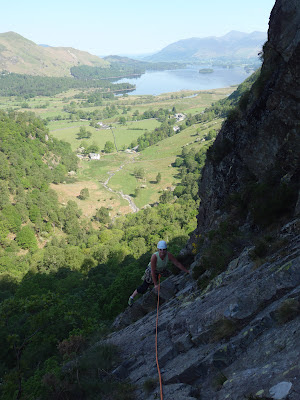 In the afternoon we drove back towards Keswick & walked into Shepherds Crag. 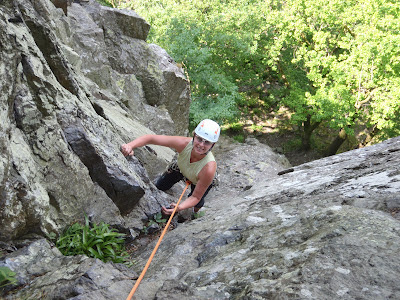 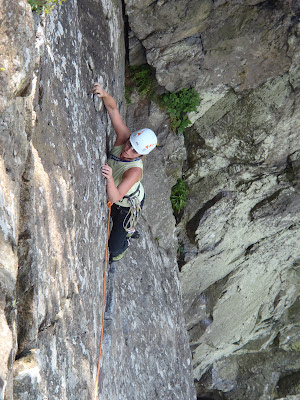 Dawn on the delicate last pitch, traversing out across the top wall on Ardus, Shepherds Crag

We had a great couple of days & not a bad haul of routes for Dawn's first forays into climbing outdoors!

On Tuesday, Leo & myself headed up the Band in Langdale to check out the routes on Flat Crags.
I wanted to get on Ataxia &/or Redundancy of Courage & Leo wanted to take a look at Flattery. 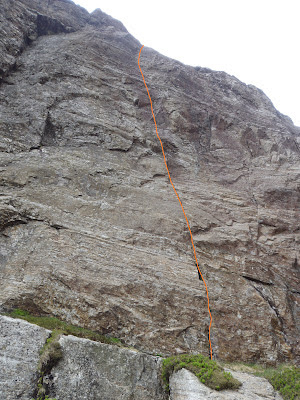 But we did neither!

In-between Ataxia & Exposure, we spotted a great looking line pulling out left of the overhang which Exposure traverses under & climbing the steep wall & faint crack lines above to the top, which wasn't in the guidebook!
Enough said, we harnessed up & with all the kit walked around to the top of the crag & dropped a rope down the line. It was only then that we realised just how steep the line was, but there are holds on it & it looked like it would go. 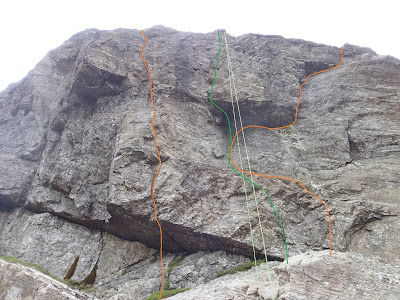 We placed the only gear on the route at two thirds height & where you exit the overhang at the bottom & worked the route.
Tough steep climbing, which I felt was more akin to moves made on the grit with balance, timing & body positioning playing a crucial part in unlocking the moves & getting up the route.
Fantastic climbing though but very pumpy with the route not letting up until you hold the final slopers at the top! 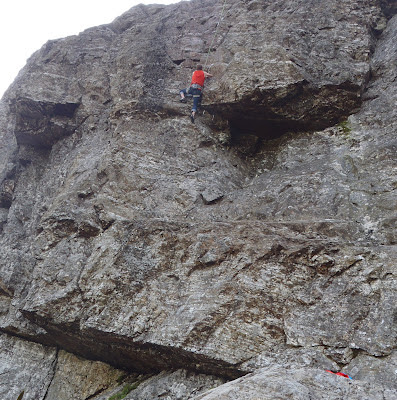 Leo working the steep difficult moves out around the overhang & onto the hard sequence, linking the unrelenting wall above, Flat Crags, Langdale

With time against us & after a few turns each working the route which actually took most of the day, I pulled the top ropes & Leo psyched up for the head point (pre placed gear).
Although the gear was in place it was still a big deal, the climbing's super strenuous, pumpy & very sequency added to which the gear was spaced enough that missing the clip on the top pieces I'm sure you'd land the the ledge below.

It was enough for me to top rope the line & link all the moves together without linking it all together as a red point - Leo felt the route was around E7 6C, which I immediatly felt happier about!

Great views down into Langdale from Flat Crags

Was it a new route?

I got home & did some homework - tonight I spoke to Keith Phizacklea, another Lakes climbing legend & it turns out he climbed the line about 4 years ago!

Keith was teamed up with Rob Matheson & they first climbed the line starting up Exposure to the roof & then out left & up the line we worked.
Keith then returned with Alan Steele of Ingleton fame & straightened the line out by starting up the steep overhanging crack of Ataxia, steeping right up into the roof, out left from the roof & up the line he'd climbed before with Rob - a great effort & a fantastic route

Keith called the route 'Over Exposure', but added if we wanted to call it anything different then go ahead! - the new FRCC Langdale guidebook it being put together as we speak, so I'm sure many more routes will start to fill some of the gaps in many of the Langdale crags.
Looking forward to getting back up there.