My thoughts on the new Scarpa Crux

Back in the Lakes this week & my new Scarpa ‘Crux’ approach shoes have just arrived, which is great as I’ve had a couple of days guiding/climbing booked in & have being looking for a replacement shoe for some time now. 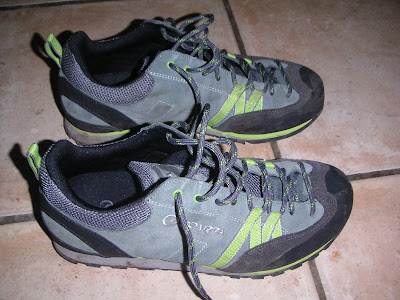 I’d been looking to replace my Five10 Tennies since before Christmas, but up until now haven’t found anything that was both comfy, supportive but also great to climb in. Up until now I’ve had a couple of pairs of the Five10 Tennies which I’ve been very happy climbing in as they’re super lightweight & have an awesome sticky sole which I‘ve been happy climbing/guiding in up to HVS in, but they’re so lightweight & soft in the mid-sole that I find them really hard on my feet during the walk-in’s, approaches & long days on the hill.
Early January I bought a replacement in the form of the Sportiva Ganda’s. They’re a much heavier shoe but gave great support & cushioning to the foot when approaching & walking into the crags. They also have a great lacing system which tightened the shoe right down to the toes for extra performance when climbing added to which the super sticky sole made for a great climbing/approach shoe, they even performed great on wet rock. Unfortunately though the sticky sole didn’t last a couple of weeks before it started peeling off from the main sole unit & I had to re-stick it down with super glue. This continued to be a problem on the other shoe & then also in different places around the edges & the toe area which was frustrating. Also the weight of the shoe became more & more annoying, it felt like one Ganda shoe was the same weight as both my Five10 Tennies put together! 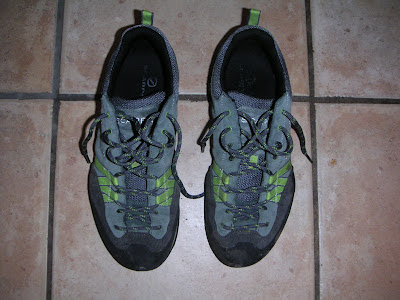 I spend a lot of time walking, climbing & guiding so it makes a real difference & the shoe needs to be absolutely right.
I’d heard good reports about the new Scarpa Crux’s so I thought that I’d give them a run out. The Lakes this week was a real test for the Crux’s as the weather’s been absolutely awful, heavy rain, flooding in places, strong gale force winds, thunder, lightning & super wet grimy rock!
The Crux’s are slightly heavier than the Five10’s but much, much lighter than the Sportiva Ganda’s. Comfort wise & the feeling of supportiveness around the foot walking in & climbing all day in, they are comparable to the Sportiva Ganda’s but lighter & easier on the foot as the Ganda's & not as hard or uncomfortable after a long day out climbing/guiding as the Five10 Tennies.
The Scarpa’s felt very sure footed on the approaches to the crags, comfortable & supportive & didn’t feel like slipping once on the wet rocks or boulders approaching the climbs/routes. At the end of the day my feet didn’t feel like they’d had a hammering which I couldn’t say after a day climbing/guiding in the Five10’s.
Climbing wise I was a little sceptical & it took me a while to trust the Scarpa’s on small wet footholds, but the rubber & sole was awesome. The Crux’s stiffer sole unit gave the foot more support & comfort than the Five10’s when edging & the rubber was fantastic on the wet rock climbing around VS/HVS standard. Later on during the second day the wind had started to dry the rock out and I enjoyed patches of dry rock where the Crux’s really came into their own with great friction & security when I needed it & comfort/support throughout the pitch/route.
It’ll be interesting to see how they last out…………….. but really enjoying them at the moment – a great shoe for approaches, scrambling & climbing up to VS/HVS being also very comfortable & supportive during long days out.
Very impressed & they look great as well!
Safe Climbing
Ade
Posted by Adrian Nelhams at Saturday, June 30, 2012