The Montenvers train pulled steeply out of the valley, leaving the heat & chaos of Chamonix behind for the quieter mountains that lay ahead. The train slowly grinded its way up through the dense evergreen forests covering the hillside which every now & then would clear giving great views back down into Chamonix & villages beyond. Tunnels cut through the hillside & steep cog track stitched the train’s journey together to where it terminated overlooking the Mer du Glace 100m below.


Fantastic views down onto the glacier & its jumbled mass of ice, crevasses, rocks & moraine & of the surrounding peaks like the Aiguille Vert, Les Dru, Les Moine, the Grand & Petit Jorasse, The Dent Du Geant & the Grand Charmoz – amazing!
From the station we headed down the ever increasing ladders onto the Mer du Glace & headed south towards the Leschaux glacier & then up more ladders which climbed steep rocks leading to the Couvercle Hut under the south face of L’Aiguille du Moine. 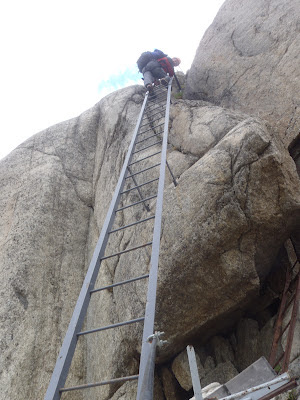 Paul climbing the steep ladders leading to the Couvercle Hut 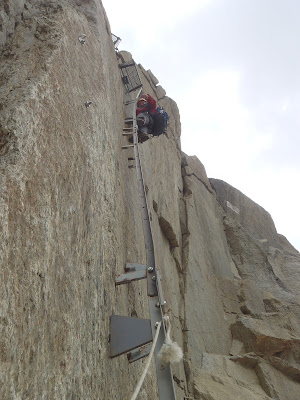 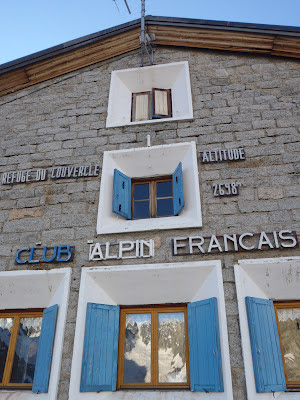 
You couldn’t help but be blown away by the views from the hut, with the centre piece being the classic & iconic North Face of the Grand Jorasse, one of the six classic north faces in the Alps. It’s many an alpinist’s dream to climb one of the routes on this classic north face & it was totally inspiring just looking across at the many lines weaving their way up through the rock & ice to the summits of this huge face. 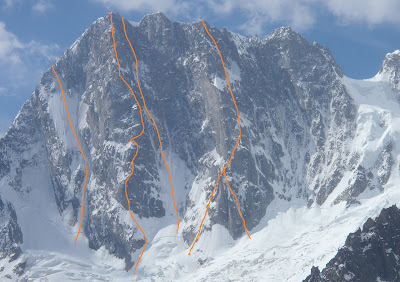 The beautiful North Face of the Grand Jorasse

1 The Shroud – FA, R.Desmaison & R.Flematty 1968
2 The Walker Spur – FA, R. Cassin, L. Esposito & U. Tizzoni
3 The British Route (also known as the MacIntyre Colton) FA, A. MacIntyre & N. Colton 1976
4 The Croz Spur – FA, M. Meier & R.Roberts 1935 – This was the first route to be climbed on the North Face. A little further right is the Croz Spur Direct a variation to the start of the original route avoiding much stonefall found low down.