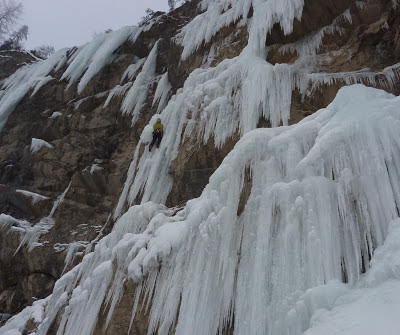 Head down I check my feet. I step my right foot in underneath my body weight & push up, look left & step my left foot out onto a small icy noble, then look right & carefully place my right foot out in-between some thin stalactites. With hardly any weight on my right I pull hard & push up through my legs. Now with my right arm locked tight I carefully place my left axe into a small hollow. I can see the pick through the ice & it’s thin, bloody thin but that’s all there is & I gently pull & repeat the process being as light on my feet as I can. Head up & I place the right axe out onto an isolated small blob of ice which shatters but doesn’t break off. If I pull the axe to try & replace it they’ll be nothing left, so I pull gently driving up again through my legs keeping my elbows close to the ice to help the picks stick. I look up again & then look down, this pillar’s hardly attached! It’s a one way ticket now, I’m committed. Well this is what I’m here for! This is steep, fragile, technical & very very pumpy! I just need to keep it together, weight my feet, stay in balance, delicate axe placements………soon I’ll get an ice screw placement………… 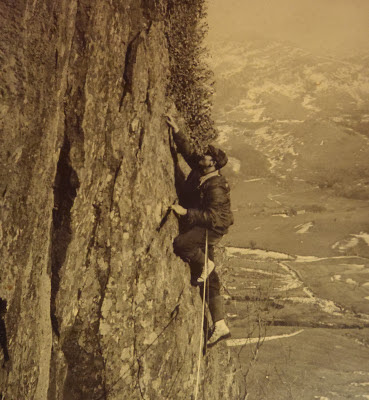 Jesse James a spotty youth of 18/19yrs, stands at the bottom of the Classic Ordinary Route on Idwal Slabs in North Wales, first climbed back in 1897 by T.Rose & C.Moss

Jesse kicks the thin layer of ice with his soft Vibram soled boots, they just round up & make no impression. Jesse looks up & the whole route has a layer of gleaming white ice marbled all over it. Jesse tries again with the boot….still no impression. Head down he checks his right pocket & fumbles around until he finds something. Jesse pulls out an old one penny coin & a Yale lock key from the front door of his house! The old one penny coin had a sharper edge so he started to chip away at the ice to create an edge just big enough to stand on. He came close to the ice, lifted his right leg up, connected with the edge he’d just created & gingerly stood up. With the left boot trailing Jesse dug his door key into a soft edge above giving himself some stability with his right hand & then with his left hand  bent down & chipped away another small edge for his left boot. Now with both his door key & old Penny coin securely dug into the ice above he stepped up with his left foot & gained a little height. The ice now had formed fat & was steeper & more marbled, Jesse couldn’t make progress with the penny coin as the ice was just too hard. Jesse’s partner moved in close to the ice & slid the knotted hemp rope which was around Jesse’s waist to one side, so as not to get in the way. On tip toes Jesse’s partner braced himself against the ice while Jesse carefully bent his right leg & carefully placed it onto his shoulder. Then with the drive from his legs, pushed up giving him an extra meter above the steeper ice step to again chip away a tiny edge for his left boot, which he then stepped on & with his key & old penny keeping him in balance he slowly transferred his weight & carried on. ‘It’s a one way ticket’ as Jesse looks down at the ground some way beneath him & then up at the marbled smooth ice above.

Jesse kept it together………… & possibly made the first winter ascent of the Classic Ordinary route on Idwal Slabs. If not the FWA then certainly one of the early winter repeats.

Even though the slabs are tilted & at a moderate angle, it was still an impressive ascent in a day when your only protection was sure 'footedness' & nerves of steel.
Jesse's now over 70yrs & is still as fit as ever, roaming the hills around Snowdonia & runs the infamous ‘Jesse Jame's Bunkhouse’