I was very inspired this summer after climbing the Grand Cornier as it reinforced the fact that there's still so many wild and adventurous places to go climbing in the Alps with no-one around mid summer season.
I’ve always looked across at the Grand Cornier from the Dent de Tsalion & the Aiguilles de la Tsa and wanted to climb its more remote South Ridge from the Col de la Dent Blanche. I've always thought that it would make a great adventure and I wasn't wrong. 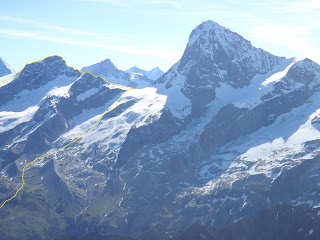 Whymper along with Croz, Biner & Almer made the first ascent of the peak back in 1865 from the North & Moiry Glacier.
It's the same with many peaks just shy of 4000m, they get very little attention and this is doubly so for the Grand Cornier as it also sits in the shadow of its impressive neighbour, the Dent Blanche to the south.
We planned for the traverse, climbing the S/W Ridge and descending down the more popular N/W Ridge AD+ 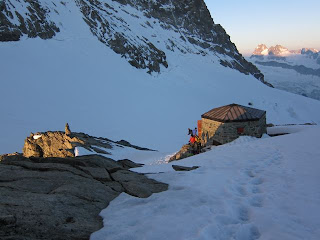 At the foot of the S/W Ridge and right on the Col de la Dent Blanche is the Dent Blanche bivouac shelter which is actually more like a small hut, hexagonal in shape, stone built and sleeps 14.
It’s a great design with a round table taking up the central area, a small area for cooking and bunks around the outside making up five sides of the hexagon. A real luxury not to have to carry heavy bivouac equipment, but still have a remote experience in the high mountains. We carried just food, a little gas and a single burner, everything else cooking pots, plates. mugs, knives & forks were all in place at the bivouac. 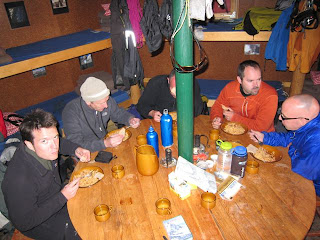 We parked and set off from Ferpecle just above Les Hauderes in the Val d’Herens and walked up the steep trail to Bricola. We had fantastic views of the huge Glacier de Ferpecle, spilling down from under the Tete Blanche & up at the beautiful Dent Blanche, one of my favourite peaks in the Alps.
We then headed north east off the main track and up onto Glacier de la Dent Blanche making fresh tracks in the new unconsolidated snow. It was hard going up to the Col and it was a welcomed sight to see the Dent Blanche bivouac as the ground flattened off. 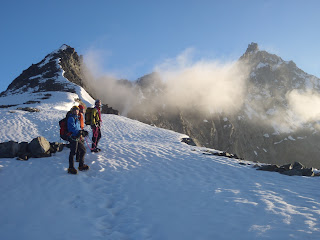 It felt pretty wild & remote up there at the Col with amazing views across to the Weisshorn, Zinal Rothorn, Ober Gabelhorn & the Monte Rosa Chain behind.
We set off early from the bivouac shelter and headed up the lower part of the S/W ridge, the weather was amazing as were the views. 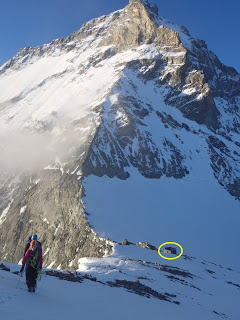 The ridge was long with some amazing towers and technical climbing at AD+. It was continually interesting on great rock & above all we had the place to ourselves. 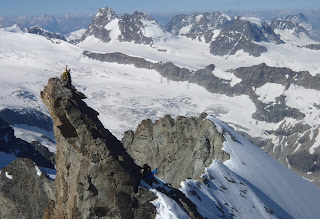 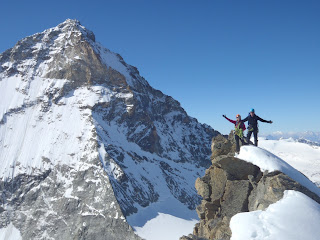 Looking back down the ridge from one of the towers, you can just make out the Bivouac shelter at the Col. 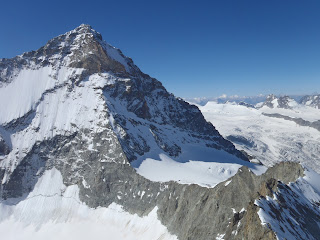 We were so fortunate with the weather and conditions.  We traversed the peak & descended down the N/W Ridge which was also technical AD and by no means a walk even with fresh legs, then down the Glacier de Moiry to the Cabane de Moiry - 14hours hut to hut
It was easily one of the best mountain days out in the mountains I had this summer a real adventure & a peak I’ve been wanting to climb for a long time.
Ade
Putting in fresh tracks all the way to the summit felt like this was the first ascent this year.
Posted by Adrian Nelhams at Tuesday, November 02, 2010