Sardinia or Sardenja as the local Italian's spell and pronounce it, is the second largest island in the Mediterranean -120km off the west coast of Italy.
Surprisingly, the island is both very mountainous and a lot bigger than we had expected. Sandstone, granite and limestone cliffs litter the island, with an impressive range of traditional and sport climbing routes of all grades. 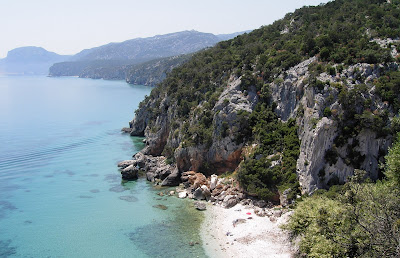 We rented a car from the airport in Cagliari and headed to the small fishing port of Cala Gonone, which is situated half way down the east coast of the Island. We spent most of our time between here and the very picturesque mountain village of Dorgali, which were great hubs for a number of different climbing locations to suit all grades and tastes. 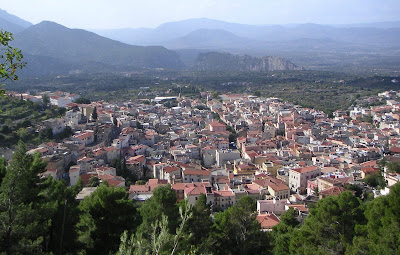 The picturesque village of Dorgali

You can climb in Sardinia year round with climbers having fine weather weeks in November & December but the weather at this time of year can be cooler and less predictable. September/October is a great time of year to visit, as is the end of April through into May/June, as the weather at these times is generally good and a little cooler than the mid-  summer months.
It was inspiring to be climbing on sea cliffs that you access by boat one day and the next to be climbing on outcrops high on the side of a mountain with fantastic views over the ocean and surrounding valleys.
I spent a day climbing on the famous limestone slabs of Poltrona, which had grades to suit all abilities and routes as long as 4 pitches. The rock was the most amazing pocketed limestone, tilted at an angle that meant most of the work was on your feet. 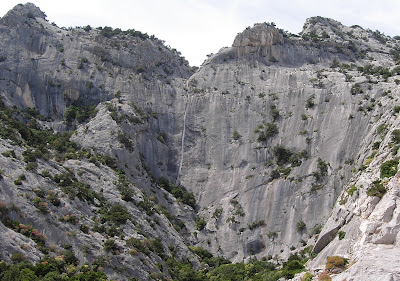 The limestone slabs of Poltrona, near Cala Gonone
I spent a couple of days at Cala Fuili, a deep canyon that terminates at the sea and a small beach, which was a great place to relax and take a swim to cool down before the next route! The canyon was littered with outcrops and again routes of all grades and aspects in or out of the sun.

Cala Fuili in Cala Gonone
Dorgali the closest town to Cala Gonone, I felt, had some of the best climbing on beautiful, steep orange walls of pocketed limestone, with amazing views over the town.
We spent a day on the remote cliffs of Surtana, which had a completely different and more of a big -mountain feel, with climbing on long multipitch routes in a hidden valley away from everything and everyone.

Arcadio, near Cala Gonone
Arcadio just above Cala Gonone had some fantastic climbing on beautiful, slightly overhanging Limestone with great views over the sea & back towards Cala Gonone. The potential for new routes here as with many areas was amazing. 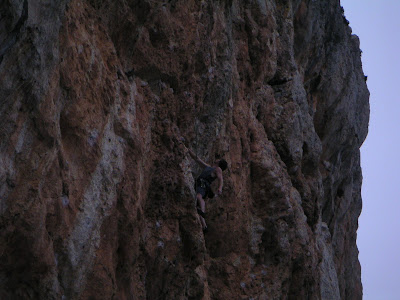 In addition to the climbing, the island is full of other surprises such as vineyards, olive groves and the home to some of the oldest acheological remains dating back to as early as 1700BC.
The houses and towns have a very mediterrainean feel about them, with the houses tightly packed in amongest each, narrow streets, baloneys and white washed walls.
All this with the addition of some delicious locally grown food and great local vino, it was all over much too quickly!


I had a great feel for the place, the locals were super friendly and the whole place seemed very welcoming & open. We used the Guide book Pietra di Luna which was good, but I believe there's a new guide book coming out soon, which is even more inspiring with even more routes and area's in it.