Stay safe on the ice this winter

Some thoughts on ice
We all know that air temperature is the biggest factor in the creation of ice and icefalls, this also means that temperature is the most important factor when considering the strength of the ice and whether it’s safe to climb or not. 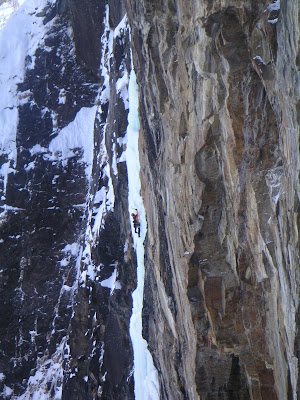 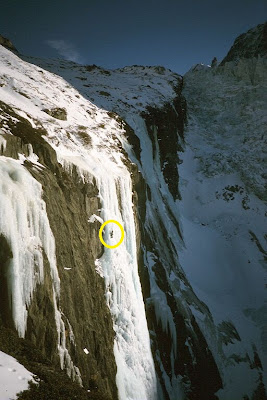 Be careful when……………….
You experience, very wide-ranging temperatures (minimums of –15degrees to a maximums of +10degrees) – These spikes of cold and warm temperatures, destabilize the structure of the ice and drastically lowers the strength of the icefall, possibly causing natural collapses. 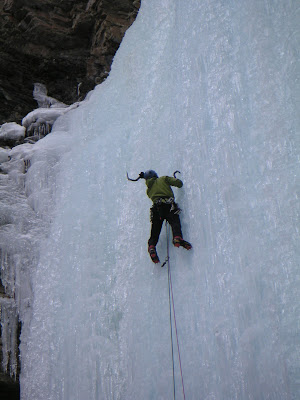 In prolonged periods of warm temperatures (-1/-2 degrees overnight with daytime temperatures of +10degrees) - These periods of high humidity start the melting out process of the icefall.  The structure of the ice starts to break back down to its original fluid form. Firstly the ice becomes saturated in water, creating more weight in the icefall and conversely putting the icefall under a lot more tension. The ice will loosen its bond (delaminate) from the rocks that it was once attached to as they heat up in the sun with the increased humidity. The shrinking of the ice as it melts out, speeds up this delaminating process. Pockets and hollows also fill with melting water also speeding up this melting process. 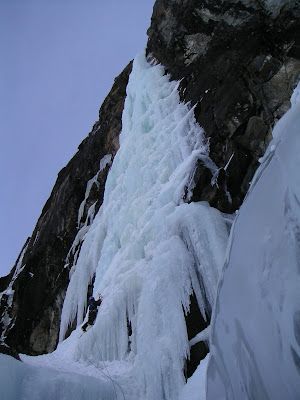 During this thaw you need to think about the fact that you may get natural collapses of steep pillars and fringes of ice, so keep an eye on ice that’s maybe formed a pitch above you or fringes to the side.
Think about a safe place to climb?
Easier angled icefalls are generally under less tension, supported on the easier angled rock beneath them. These easier angled icefalls tend to be fatter due to a larger water feed and take longer to completely melt out and become unstable, sure wet surface ice but a structure that is still intact.
In warmer weather think also about the altitude that you’re at and decide whether you need to go higher or maybe climb on a more northern aspect? 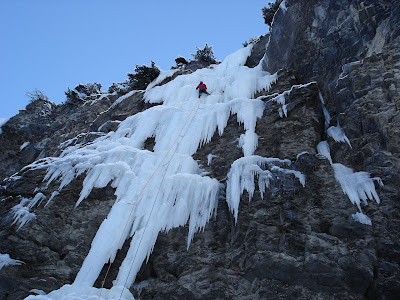 In a period of constantly very cold temperatures (-15/-20degrees) - During these very cold temperatures the humidity is very low, which tends to dry the ice out, shrinking it and putting the icefall under a lot more tension. The structure of the ice has changed and lacking the strength it once had.
The ice becomes very dry, hard and brittle with it cracking (tension being released) and shattering like glass (as there is no structure to the ice) as you climb it.
The dry, brittle ice can also loosen its bond to the surrounding rock as it shrinks and dries out.
During this period of very cold temperatures give some thought to the altitude that you’re at, the aspect of slope you’re on and the steepness of the ice. Head down the valley to lower altitudes or try to climb on sunnier aspects. Easier angled ice at lower altitudes and on sunnier aspects would be a safer than climbing on northern aspects at higher altitudes in these types of conditions. 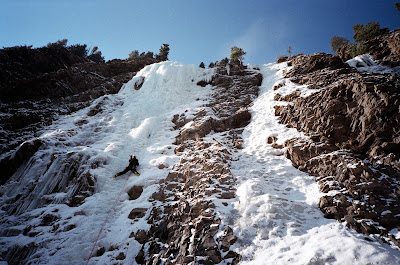 A prolonged period of warm temperatures and then an overnight or few days of a very cold temperatures (-10/-15dgrees) followed by warmer temperatures again – This gives the impression of a well formed icefall but actually the ice has very little structural strength and the ice is very brittle and under a lot of tension.
During this time avoid climbing steep ice that is already under a lot of tension, especially pillars of ice that may well collapse under this sort of tension.
The ice will appear well formed but the ice is brittle on pick placements, fractures easily, ice screws split and crack the ice and core from the screw will be dry fine granular ice with no structure or strength. The ice needs to almost melt out again and then slowly reform over a longer period again for it to be safe to climb on.
The route maybe safer to climb once the sun has been on it to relax it again.
Or during a very cold snap, climb on easier angled icefalls or at a lower altitude and on a sunnier aspect which will have been less affected. The ice will be more relaxed and less brittle. 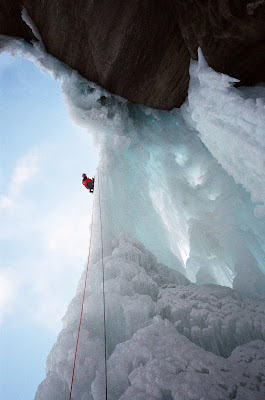 We can explain the brittleness of ice over a quick freeze when we make ice cubes in the freezer.
You fill the trays with water & then put them in the freezer. The water quickly freezes from the outside in, trapping the air, hence the ice never being clear but opaque in colour.
Take the ice out and drop it onto a work surface, the brittle ice just smashes everywhere.
During a slower freeze the ice is clear in colour and less brittle.
Start warming the ice up to room temperature and the ice becomes less stressed, relaxes and the structural strength increases
We also know that if water is frozen in a glass jar the glass breaks, because water expands. This sudden expansion of ice freezing over night can also break any bond to the rock the icefall has formed on. 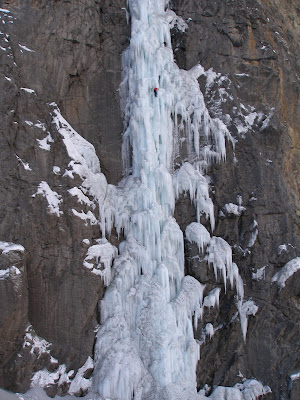 During these spikes in temperature try to even the spikes in temperatures out by staying at a lower altitude so you only have a –3 degrees freeze over night which can firm the ice up and also make it safe to climb on, not adding to much tension all at once to the ice.
Wet saturated ice has a low structural strength as its turning back into its normal state especially over a prolonged period and the water molecules are not so well bonded together, this ice looks very blue from a distance.
Very white ice seen close up or from a distance may be bleached by the intense sun and commonly found on sunny southern aspect. This ice takes on the look and feel of polystyrene and has very low structural strength. 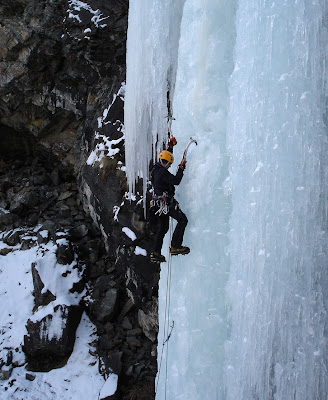 The wind can also have a damaging effect on an icefall, changing the structure and strength of the ice by melting out large areas that are critical to the strength and stability of the ice.
Seepage lines will come in and out of condition a lot quicker than bigger icefalls that have larger feeds
Early cold weather and snowfall and then a warmer period will feed the ice lines and help form & fatten up icefalls
Snow insulates the ice, warming it and turning it back to its liquid state. Snow covered ice will melt and then freeze forming a weak egg shell effect on the ice surface which will need to be cleaned away. 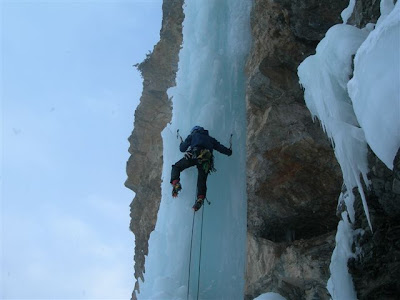 It’s so important to know the history of what’s been going on over the past couple of weeks to know how the ice has changed or not, to be able to make an informed decision on whether you’re chosen icefall is safe to climb on or not.
Just because there’s a track in the snow up to it, doesn’t mean it’s good to climb.
Know the temperatures and the history, talk to others, search the web but make your own decision, the ice changes day to day. One day an icefall may be climbed & in the bar their telling you what a great route it was, encouraging you to go and climb it, the next day you go and take a look and it's on the deck. 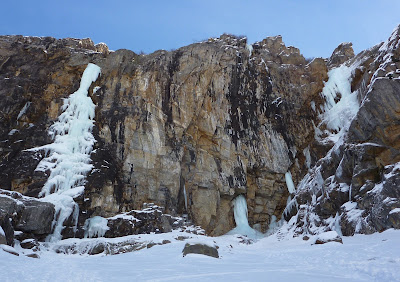 You may turn up during a really cold period or arrive during a very cold night with temperatures due to increase during the following day. This may sound ideal especially as the icefall looks from a distance to be well formed but look around for other signs. Find out the history and what the weather’s been doing over the last 2 weeks, it may have been unseasonal warm and all the icefalls had been melting out. Your icefall could look good and ‘all there’ but that may be superficial, and the ice very brittle and if steep enough very dangerous.
Safe climbing
Ade
Posted by Adrian Nelhams at Tuesday, November 09, 2010