We're staying at Hotel La Barme this week at the entrance to the valley of Valnontey in Cogne. It's such a great venue for all the icefalls, with a friendly family atmosphere & run by the Herren brothers Stefano & Andrea who have become very good friends over the years. 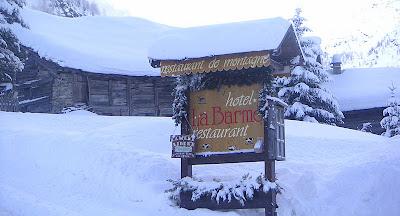 This is THE place to stay if your over in Cogne
We headed up Valnontey today - as you head up the valley the routes on the right such as Lauson & Ingnegneria weren't formed.
The first pitch of Thoule looked good but the upper pitch was very lean and as the pitch lays back the slab looked very thin, patchy & delaminated - it gets alot of afternoon sun up there.
Thoulette & Crolla di un Mito weren't formed.
There were some guys just starting up Valmiana but the first(main) pitch looked thin & patchy near th top & didn't look that inspiring. The upper pitches didn't look much better either.
There was also a team on Sentiero dei Troll which looked alot better & in good shape with fatter ice all the way up the route - there's very little snow around so even though the route gets alot of sun conditions looked good.
Gran Val further up the valley & on the same side looked very thin & out of condition with very patchy thin ice & water running behind it.
Erfaulet WI5 140m - its a great route & looks in great shape 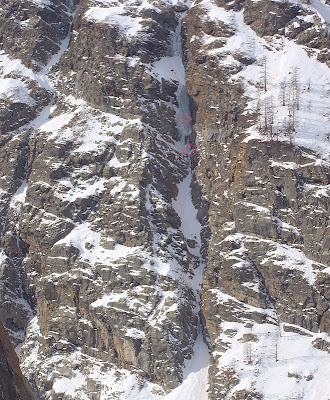 A team high up on Erfaulet
There was a team on Di Fronte al Tradimento WI5 which again is a great route and looks fat & well formed.
We had a great day climbing Patri today, giving the guys a chance to lead some more, looking at multi-pitch techniques, anchors, belays, abseiling....................... 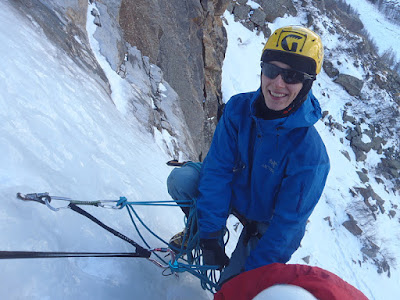 Mathias at the top of the first pitch he led 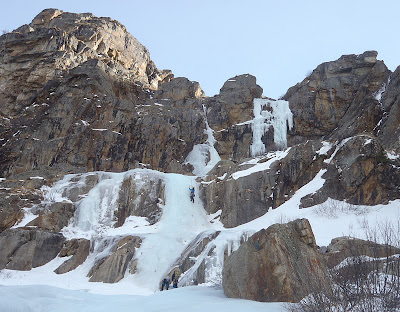 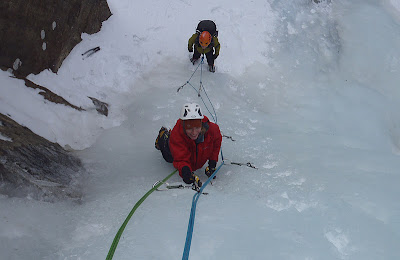 Teaching leading on the upper pitches 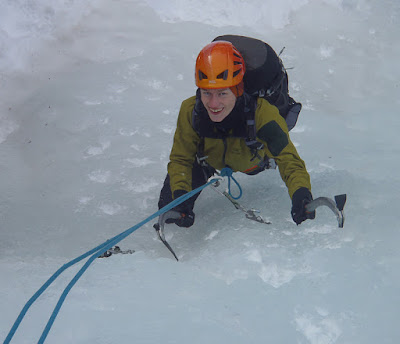 Emil on one of the upper pitches, which was in great shape
Just be a little careful as conditions are fairly dry at the moment & the snow is firm so any ice knocked off from above, rattles all the way down to the bottom of the route!
Looking forward to heading into Valaille tomorrow.
Safe climbing
Ade
Posted by Adrian Nelhams at Tuesday, January 24, 2012