After a very successful if not muddy event last year, Brockhole next to Lake Windermere, was again the venue for the Wheelbase North of England Cyclocross race.

This year it didn't rain leading up to the event but instead it snowed forcing them to cancel the junior racing on the Saturday.

Around 200 riders descended on Brockhole, riders of all ages and abilities warmed up for the various races during the day.

The organisers did a fantastic job clearing the carpark and setting out an interesting but technical course around the estate.

To toughen up the course, they used the steep bankings in the woods up from the shores of Lake Windermere, where riders had to run and carry their bikes, in another place big logs were laid down, which again meant that you had to dismount and carry. If that wasn't enough nature through the biggest hit which was the snow. 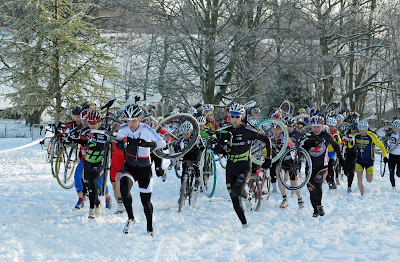 The start
Normally the start would have been a cycle, but on Sunday in all the deep soft snow it was a run and carry up a gentle hill. Our car was recording minus 6 in the carpark and it was difficult to warm up beforehand, but I have to say as soon as we rounded the first bend I felt warm! 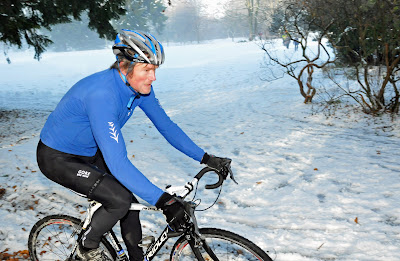 Controlling the bike in the soft unconsolidated snow was the hardest part, the front wheel seemed to have a mind of it's own.

A young lad in the carpark setting his bike up before the start told me to reduce my tyre pressures, which in turn would give me more traction. It seemed plausible and he looked like he new what he was doing (he was warming up on a turbo trainer) this seeming small thing probably saved me from coming last! so thanks for that whoever you were. 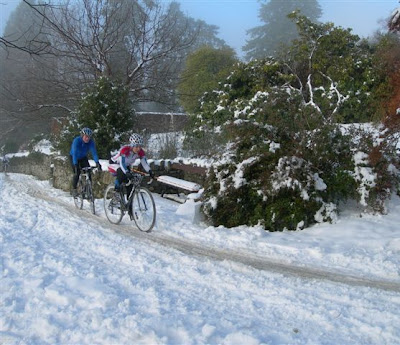 Another difficult part was the overtaking. You had to commit to the softer unconsolidated edges were less people had been. On numerous occasions I tried to overtake and ended up going out of control and either shouldering and nearly knocking off the person I was trying to over take or I ended up in the snow!. It was a fantastic event and so idyllic on the shores of Lake Windermere with the snowy Lakeland peaks in the background. 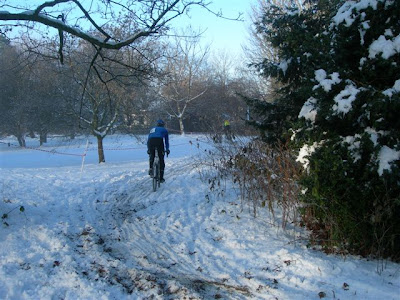 I'm already looking forward to the next cyclocross event, which I hope to get to later in December.
Ade
Posted by Adrian Nelhams at Wednesday, December 08, 2010