Our Boxing Day night out!

After a great day out with friends, Dean and I met up around 8pm and headed over to Borrowdale. 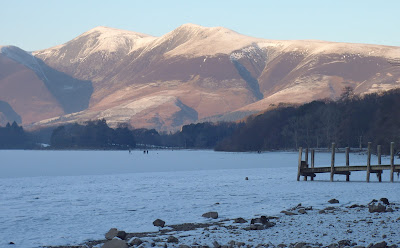 A few days earlier we’d spied a beautiful ice line which had formed on the right edge of Buckstone How Upper left crag. The line was catching the mid-day sun and looked fantastic.
For the next couple of days it was all we’d talked about, it looked steep, long, well formed and with relatively easy access.
The ice formed down a steep section of crag up and left of Buckstone How (or Yew crag Quarries crag as marked on the OS map) just above Honister Pass and to the right of Buckstone How Upper Left crag.
There’s an easier angled broken gulley/corner, higher up, left and behind Buckstone How which is marked in the FRCC summer climbing guide as not to be used in descent from the crag after climbing the summer routes there - the ice wasn’t formed here but further left than this on a steep section of compact crag.
We parked up at the Pass and headed up the old quarry track to Buckstone How, traversed underneath the crag and then climbed our way through steeper broken ground till we were under a steep wall above.
We both looked up and our headlamps picked out the lower ice which looked thin but well bonded and above a steep ice pillar rose up and finished in the darkness above.
Then it started to snow, lightly at first and then more heavily and with purpose with the wind closing down most of our visibility.
We looked at each other and new that our biggest stress at this point wasn’t the ice which looked fantastic, but was our car and how we’d get back down the steep road from Honister Pass again.
Dean started up and the beam from my headlamp reflected off the twinkling snow coming down which now was being blown around by a strong wind. Dean’s pool of light and the sound of his ice axe chinking into hard ice faded into the night leaving me to stress about the car on my own. 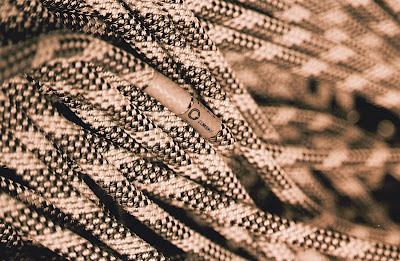 A voice shouted down and asked what I thought, Dean was at the pillar and also worried about the snow. I replied with ‘there’s a shovel in the back of the car, climb the pillar!’
It was on, Dean worked the pillar, belayed and brought me up. The climbing was fantastic, the ice well formed, featured and well boned. The pillar was vertical and had formed into a thin column with few features, I had to pinch myself that we were actually here.
What a great pitch, as I pulled over the pillar to the screw belay and smiled at Dean. I looked up at my next pitch and my headlamp picked out steep white ice bleached a little by the weak winter sun.
The route faces SW getting a little sun, perfect to warm the ice and fatten it little by little. The cold weather we’d had secured the ice from melting out completely and with the shorter days also playing a part, helping form the line.
I left the belay and climbed thin, steep, well bonded ice which led onto a thin delaminated section of sun bleached ice, which felt more serious. Most of the screws up till now were either tied off at half length or clipped at the hanger but with an inch still proud. I worked the placements carefully drilling in a few screws and tying them off. I pulled over and up into a groove filled with thicker ice, which took a great screw and a smile broke across my face.
I picked my head up and the headlamp picked out the top of the crag just visible in the swirling snow filling the dark night sky.
I quickly worked the last section of easier angled ice and pulled over the top – awesome. 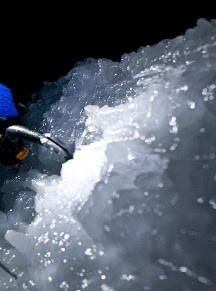 I belayed, Dean arrived and we shook hands but didn’t speak, we went into automatic, rigged a belay and abseiled down. Quickly we stuffed everything in our sacs and ran down the hillside, up and under Buckstone How Crag, the snow now laying thick and covering our old tracks.
Without realising it we’d walked onto the road which was now think with the white stuff. We chucked everything in the car, Dean pulled out the shovel in readiness and I started the engine, spun the car around and headed down the hill in first gear.
The crux of our adventure was just around the corner and over the cattle grid at the top of the steep section of hill. I engaged first gear and committed to it.
It’s the umpteenth time I’d been out when the snow tyres had paid for themselves and the first when having snow tyres all round really made the difference.
We pulled up at Seatoller and the silence was filled with laughter and all the excitement being released – what a steel, we couldn’t believe it.
Totally white roads led back over Dunmail raise and back to Ambleside where the snow started to thin out and home where it was almost raining.
We’re not sure if anyone else had climbed the line before or whether it’s even formed before or even seen it before but in any case it was a great adventure and one of my best night’s out this Christmas so far! 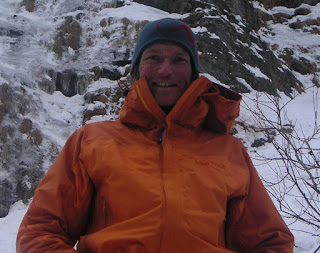