You've got to just love the Lakes!

I had a couple of great training rides here at home in the Howgills on the Cyclocross during last week. It was a week of warm weather stripping all the snow and ice off the fells with the freezing levels well above the summits. But it was great to be out on the bike making the most of the warmer weather and having my own adventures on unknown tracks and trails, both muddy and icy/with pockets of old snow in places. It was hard riding with plenty of carrying and some difficult descents.

Then Wednesday it started to get really cold again and Thursday we woke up to a super hard frost.

Friday, Tim and I probably had the coldest cycle ride we've ever had! The day never got above freezing and for the most part was well below freezing. The roads were treacherous and very icy, the ground off-road was rock hard with bullet proof ice filling all the trails and tracks. For 3 hours we struggled to keep warm and once back at Tim's I found a layer of ice between my cycle shoes and overboots! I said to Tim that my feet actually felt quite warm, but then my feet started to thaw out and warm up and then I felt the hot aches..

Friday night it snowed and then it was all on again.

Dean and I met early doors on saturday and headed into the Lakes.

The crag we headed to hasn't been climbed on in winter before and we hadn't even seen it in summer! making the day feeling very adventurous and exciting.
We'd scoured old photo's and pictures and gleamed what we could locally (without also giving too much away) and felt it had all the signs of a top winter crag. 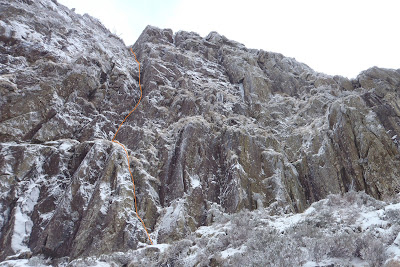 We found the perfect winter crag - completely overgrown, frozen turf chocking up all the cracks and corners, ice seeping out everywhere and the whole place wind blasted with frozen snow, awesome.
We opted for the left most corner crack system, which gave us some great mixed climbing. 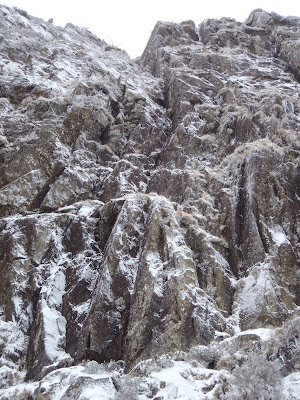 We climbed the new route in 3 pitches. 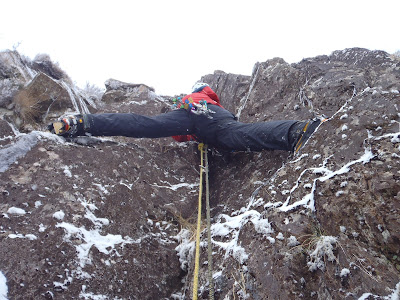 Dean bridging an awkward section low down on the second pitch 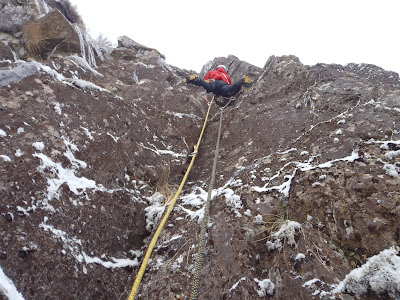 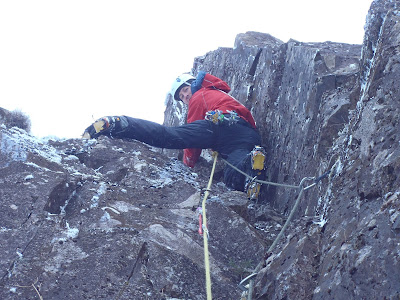 Dean pulling over an awkward bulge, half way up the second pitch 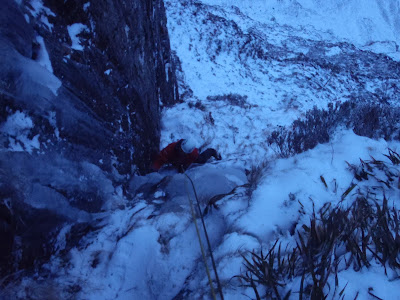 Dean climbing the final steep ice step at the top of the third pitch
The route had it all, with steep corners and cracks chocked with frozen turf and ice and then to top it all, the final exit at the top of the third pitch was two fragile pillars of ice. You had to climb these ice pillars and then pull into an ice chocked groove to the top which was a great finish to an awesome route. 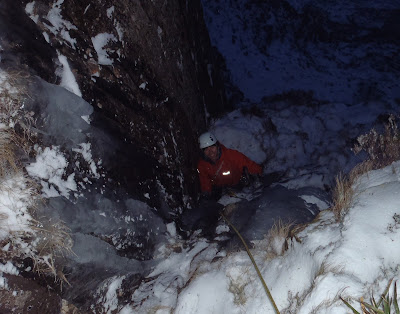 We topped out just as it was going dark and abseiled back down to our sacs - a great day and a real adventure.
You've got to just love the Lakes!
Ade
Posted by Adrian Nelhams at Sunday, December 19, 2010