The Wake up the Nation Tour

We headed down to the MEN Arena in Manchester on Friday and saw Paul Weller play out of his skin, to a packed out audience of thousands.

We had the best tickets in the house -  standing and only five rows from the front!

The Rifles supported Weller and banged out six awesome tracks - check them out, they just sounded fantastic. 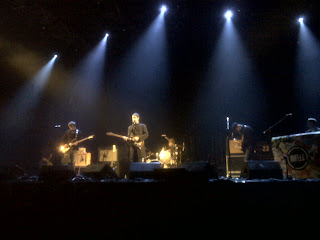 The Rifles supporting Paul Weller
Weller then came on and just set the place on fire. He played a mammoth set of twenty eight songs
'Moonshine'
'From The Floorboards Up'
'Strange Town'
'7&3 Is The Strikers Name'
'Dangerous Age'
'Sea Spray'
'Into Tomorrow'
'Aim High'
'Up The Dosage'
'Shout To The Top!'
'No Tears To Cry'
'Trees'
'You Do Something To Me'
'Pieces Of A Dream'
'Andromeda'
'Pretty Green'
'Start!'
'Wake Up The Nation'
'Fast Car Slow Traffic'
'Echoes Round The Sun'
'Wild Wood'
'Broken Stones'
'Ticket To Ride'
'Pretty Flamingo'
'Dreaming Of You'
'Art School'
'Come On Let's Go'
'The Changingman' 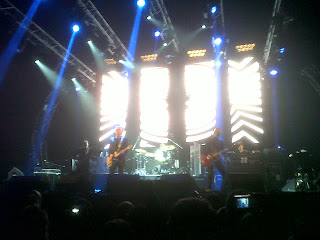 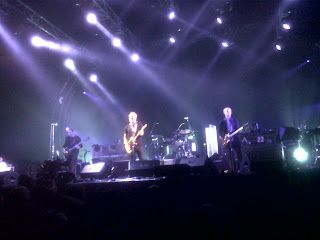 Paul Weller, Steve Craddock.......
We had a fantastic night out with Weller really bringing the new album (Wake Up The Nation) alive - awesome.
We've seen Weller many times before, but Friday night he just played a cut above and seemed to love every minute of it.

If you get a chance, get tickets!